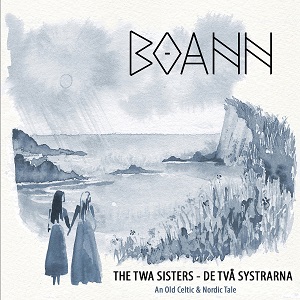 
Franco-Scots-Scandinavian band Boann (and you can't get more mixed-up than that!) have a new CD out called The Twa Sisters/De Tva Systrarna.

It's a whole song-cycle drawing on different versions - from the UK and Scandinavia - of the story of the girl drowned by her jealous sister and reconstituted as a musical instrument which denounces the murderess.

The amount of variety in the album, given that all the songs ultimately have the same source, may seem surprising, but we're dealing with a tale that has at least 531 variants around the world, and a broad palette of tunes to choose from.

The variety is here enhanced by the instrumental versatility of the core group - and the inclusion of the nyckelharpa in particular - a Swedish variant on the hurdy-gurdy but played with a bow, which gives a very distinctive sound to the work.

Franco-Swedish chanteuse Eskalina (a past winner of the Georges Moustaki Prize), is a very necessary addition for this CD as she establishes its Scandinavian credentials, singing the Swedish-derived takes on the story. The band's own Joanne McIver ably supplies the Scots, English, and Gaelic side of the vocals.

Boann attempt, by selective editing, to spread the details of the story over the 13 tracks of the album. Given that some of the original ballads clock in at over 40 verses, they've had a fair amount of leeway to present extracts as distinct songs in their own right.

Stand-outs, for me, are Two Sisters and One Knight (an abridged version of that popularised by Emily Portman's Two Sisters) , and One Bright and the Other Dark (an English label for what is, in fact, the Swedish title song De Tva Systrarna), but the whole album is an absolute joy.

The Twa Sisters/De Tva Systrarna is beautifully played and sung, with excellent arrangements and high production values. The idea of teasing a folk "concept album" from the rich weave of source material is vindicated here in full.