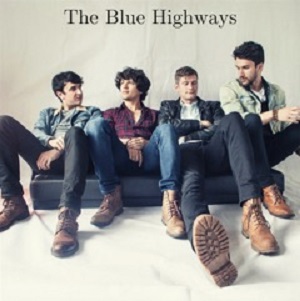 
For a band formed only last year, The Blue Highways have certainly become quite the fixture on the live music scene. They've had slots at Summertyne, AmericanaFest, Country2Country, Ramblin' Roots, and even had an Under The Appletree Session. It's easy to see why they have been marked out as ones to watch, and their new EP will do nothing to dispel the belief that this is a band marked out for big things.

Formed of three brothers (Lury's Callum, Theo, and Jack), with odd one out bassist Peter Dixon, The Blue Highways produce Americana music that is full of life. All four of the tracks on the EP will leave you tapping your toes and nodding your head. He Worked bursts to life immediately, and from there there's barely a drop in tempo to be found. These are songs of love, life, regrets, and questionable life choices, that anyone can relate to.

It's always hard to pick a standout track on an EP, and even more so when each song is so good. Matter of Love is perhaps marginally the one to look out for, with its tale of a doomed relationship kept going only because neither party is brave enough to end it. Have You Seen My Baby is also great with its slow building tempo; a blues laden opening and a perfectly country middle that makes for a very enjoyable end to the EP.

With The Blue Highways clearly a band here to stay, this is a superb debut which perfectly showcases their talents. At only four tracks, it definitely leaves you wanting more, and hopefully we'll have a longer release to enjoy in the not-too-distant future.