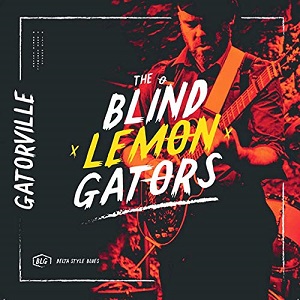 
Just few years ago Scottish singer songwriter Greig Taylor and bass player Iain Donald got together to form The Blind Lemon Gators, delivering delta blues from the perspective of their own life experiences and the places they grew up.

They are joined on "Gatorville" by Dave Cantwell (John Martyn's drummer), with the album being recorded by Mark Lough at Tolbooth Studios in Stirling. For me, Scottish blues has shown Britain the way in recent years with bands like The Rising Souls and King King, so it was no surprise to me to find the album was mixed and mastered by Wayne Proctor at Superfly Studios, he being an occasional live drummer with King King. This album holds its own with the best of them.

With its Amazing Grace intro, the opening song "Blues Man Shoes" poses a question that this album answers in bucket loads: "How can we ever sing the blues if we haven't ever walked in the blues man's shoes?" The album takes a look at the personal challenges and experiences of growing up in "the deepest darkest corners of Alloa and Stirling", and while there is no attempt to compare with centuries of racist subjugation in the deep south of the USA, the parallels of poverty are nevertheless laid bare.

It would be wrong not to take a pause at this point in appreciation of the slide guitar work of Iain Donald, not least because his first instrument is the bass guitar. Whether he is rocking it up as in this first song or delivering delicate acoustic sounds, this guy is one top slide guitar player and seems the perfect complement for Greig Taylor's versatile and excellent voice: "The way he sounds when he's singing is the polar opposite to the way he looks when he's angry" - Iain Donald

"A Little Death Around The Eyes" provides the album's first acoustic delta sound. This song contains some fabulous understated harmonies, giving plenty of space to let the lyrics breathe. And so the it sucks you in. "All I Ever Wanted" is a slow blues, delivered with gravel in Taylor's voice in the best blues tradition, and is followed by a classy interpretation of Lead Belly's "Goodnight Irene", with Taylor's silky vocal backed freeform acoustic blues slide guitar. This is the longest song on the album but it really doesn't feel that way.

With "Hurt", I was expecting Nine Inch Nails or Johnny Cash but what I got was The Blind Lemon Gators' best blues-polka swagger, with accordion and guitar accompanying a powerful drum beat. This song is where Greig Taylor opens up his full vocal range with a quite terrific performance. "Gravy Train" by contrast is a real foot tapping, rocking blues, adorned with some fabulous Paul Jones style harmonica.

"A Better Land" has the feel of "I'm Ready" from Aerosmith's back to roots album "Honkin' on Bobo". Driven by a bouncing drum sound, and with for me the best slide playing on the album this is consistently the stand out track after several listens on an outstanding album. "Ain't Got You" positively blues chugs along with its harmonica accompaniment having just a touch of delay to blend with the place where Taylor's voice seems to achieve its most authentic delta quality.

These guys can also rock it up when they want to. "Wicked Charm" has echoes of James Dewar and Robin Trower and is a rousing piece fittingly placed before the album's more reflective, slower paced final track. "Ballad Of Trigarelli" may slow down the pace but the playing might draw comparison with Wild Willy Barrett on John Otway's Bluey Green. High praise indeed.

The Blind Lemon Gators somehow manage to transpose the atmospheres and meaning of delta blues to their own lives in a wholly appropriate work that never feels contrived. Its deliberate 1930s Delta style is what makes the album such a special listen. Lyrically packed with passion and humanity, it is also a lovely touch that the album is dedicated to Karen Ann Donald. Aficionados of the blues will heap praise on this work, and look forward to what will hopefully follow.