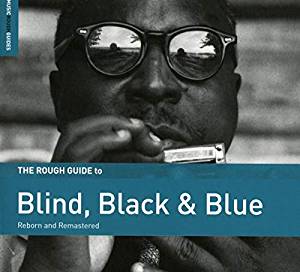 
A collection of work by blind blues artists whose remarkable contributions have left a lasting impact to this day.

From 'The Father Of The Texas Blues' Blind Lemon Jefferson to slide guitar evangelist Blind Willie Johnson, this Rough Guide highlights the blind blues pioneers who, against all the odds,were responsible for a musical revolution.

Indeed, bands such as Led Zeppelin, who recorded Nobody's Fault But Mine by Blind Willie Johnson, and The Rolling Stones, Eric Clapton and many other artists of the British Blues Boom, raided the blues back catalogue during the Sixties and Seventies to kickstart their careers.

So this is a fantastic collection of original blues that comes highly recommended to anyone who loves this genre.

Here you'll find Blind Blake's He's In The Jailhouse Now, Blind Boy Fuller singing Truckin' My Blues Away No. 2 (Take 2), Blind Lemon Jefferson's classic See That My Grave Is Kept Clean as well as lesser known cuts from performers such as Blind Joe Taggart: (Religion Is Something Within You), Blind Gussie Nesbit (Pure Religion) and Bo Carter (Don't Mash My Digger So Deep).

Don't Mash My Digger So Deep