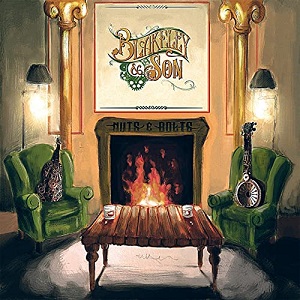 
On first listen, 'Nuts and Bolts' conjured cinematic soundscapes, so I wasn't surprised to read that son Edward Blakeley's work as a composer and producer has included working with multi-award winning BAFTA/IVOR NOVELLO nominated composer Richard Jacques (James Bond: Bloodstone, Mass Effect, Little Big Planet 2) and garnered radio play on BBC Radio as well as featuring in video games and adverts. Neither was it a surprise that father Garry Blakeley has worked with Feast of Fiddles, Steeleye Span, The Telham Tinkers and Barry Dransfield to name a few.

The variety contained in these ten tracks is impressive and again, in this area the father and son duo has plenty of experience to draw on. Edward plays electric bass, drums, guitar, piano, violin and trombone whilst Garry contributes violin, viola, low whistle, bodhran and vocals. Nonetheless, 'Nuts & Bolts' retains a sense of cohesion throughout and it's easy to imagine the father and song sitting beside the fireplace sharing music from across their repertoire over a glass of whisky, as depicted in the album cover artwork.

It may be the range of instruments and ten instrumentalists that add parts to the album which helps the music evoke a range of emotions from the first note to the last. It is track three 'Alfred and Matilda', dedicated to Garry's grandparents, which gripped me most on first hearing and which sticks with me on each subsequent play.

The album is more dynamic than I had anticipated from the artwork and alludes both to the personal and universal. The inside photograph of the father and son duo is presumably taken inside one of the family members' homes as they share a laugh, whilst the tracks are a mixture of Garry's compositions, traditional tracks, one of Edward's own and a cover of a Richard Thompson placed alongside a Michael McGoldrick instrumental.

The compositions are urgent and driven, even the quieter numbers such as 'Alfred and Matilda' where the texture builds over almost six minutes, drawing the listener in, in a way that can't be ignored. The pieces are percussive and rhythmic as well as being lyrical with some interesting chord progressions - a fine balance which makes the whole a pleasing listen. That said, there are some bold statements which avoid labelling this album as easy listening - the electric guitar which disperses into jazz and blues tinged riffs on 'Dark Water /Show Me the Money' being perhaps the most obvious example, especially as it is followed by a sparse arrangement of the traditional ballad 'Mary and the Soldier'.

This is an album that left me with questions and I'd have preferred to learn more about its creation through sleeve notes. However, perhaps some ideas are best left to be pondered over a tot of whisky with our nearest and dearest.