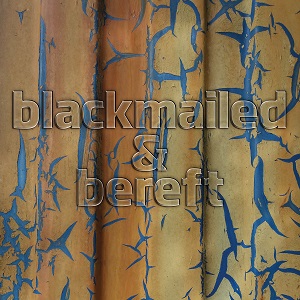 
Blackmailed and Bereft are Anita Heffernan, Chris Liddle and Gill Newlyn, ably supported on this recording by musicians from their local session based in Kenmare, Kerry on the west coast of Ireland. The band came into being through playing twice a week at said session for over 15 years, and there is a real feeling, in the arrangements and playing, of musicians who know each others ways very well indeed - in fact, it's surprising that an album hasn't made an appearance before this, their debut release.

The album mixes 6 songs - all band originals except traditional Scots ballad Waley Waley - with instrumental tracks both original and traditional. The playing of the latter is, as I have indicated is of a standard that indicates the Kenmare session as a meeting place for very fine musicians. The traditional Irish slow air Were You at the Rock has a haunting feel to it that provides a welcome contrast to the more usual jig, reel, and polka sets on the album. All well-played and enjoyable, and the reel I'm a Bereaver certainly deserves a place in the traditional canon.

However, the songs are what makes Blackmailed and Bereft stand out, for that is where this recording distinguishes itself from so many instrumental set albums which, while maintaining a high standard, often fail to display a distinctive originality.

Chris Liddle provides most of the songwriting with his wife, Gill Newlyn, earning co-writing credits on Zodiac Sky.

Some have a very traditional feel - Little Bird, also co-written by Gill, in particular, sounds as though it will soon be gracing sessions further afield than Kenmare, binding an evocative melody to its tale of winter migration. Others have a more folk-rock sensibilty - Breaking Blue I could readily imagine done by an electric band, while 50 Honeymoons has a very individual mix of country and oriental influences.

One thing that binds the original songs together thematically is the use of motifs and images derived from nature - the blue of sea and sky, the cold of winter, the stars, the Atlantic breezes, the cycle of the seasons, all provide emotional colouring for the songwriter's palette here. It seems evident that life on the wild west coast of Ireland is a ready-made fount of musical inspiration.

So, strong playing, well-chosen/written instrumental pieces, and some excellent songs. Blackmailed and Bereft deserve to be known more widely. Check them out!