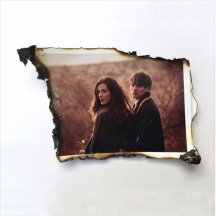 
Whoever selected the name “Ophelia” for this duo is a genius. Whether you associated the name with Hamlet’s wife from the Shakespeare play, or from the Pre-Raphaelite painting by Millais of the model Lizzie Siddal, the name implies sophistication and culture, and that is definitely what you get.

Whether you listen to these songs performed live, by just the two of them with just one acoustic guitar, or, as in the case of this record, accompanied by a full band, I am convinced you will adore them and that you will listen to them over and over again.

I’ve been a fan of Samuel Taylor since 2006 when his band Dead Like Harry toured as support to Strawbs. Discovered Rebecca Van Cleave when Sam released an EP called Paper Wings, on which she sang as support on two of the tracks. Not often you listen to an EP and get blown away by the backing singer, but I could tell that this girl was brilliant, and that her voice blended so well with Sam’s that it would be criminal if they didn’t do more together. Was quite disappointed at the time to discover that Paper Wings was Becca’s first time in a recording studio, but was delighted to find that she was working on the release of her first EP, The Bedroom Sessions, which was released in 2015.

If you haven’t discovered her yet from her musical career, the chances are very high that you have encountered her as a producer or via her acting or modelling careers. Her most famous roles is from Game of Thrones, but she even has a credit on Star Wars The Last Jedi, as a creature and droid puppeteer.

As promotion for their forthcoming debut release, they released an EP last year, which contains four of the tracks that appear on Blackbox Memories and having seen them live supporting Nerina Pallot back in 2016 there are several songs on this album which I have encountered before, so I knew I was going to delight in the new album.

This album was partly recorded partly in Sheffield, partly in Nashville, and partly in Los Angeles and there is definitely a transatlantic feel too it, though it doesn’t conform particularly to any genre. They have been compared with many other artists from Fleetwood Mac, the Cranberries to Nick Cave and Tom Waits. Some of these tracks can feel quite rocky, others very gentle, and at times there is definitely a psychedelic feel, particularly “I Can’t Dream About You Anymore”, originally a gentle soft metal track from Sam’s band Dead Like Harry.

One of the highlights on this album, of which there are many, is “The Artist”. Becca was born in London, but grew up in America. She and Sam were visiting her parents in Virginia and were snowed in, so to entertain themselves they sang. Her father sang this song, which he had written back in the 70s. Sam and Becca loved it so much they have included it on the album. It is one of the songs that Becca takes the lead, and it is beautiful.

The track “Whip Of The Wheel” first appeared on Sam’s Troubadour EP recorded in Nashville. It was included also on their EP. The phrase is not one I’ve ever encountered before. I think that the wheel is a metaphor for time: the way that cogs turn in a clock; the way that the seasons turn as the years roll by. The whip, I presume, is something that brings pain, so if I’ve understood the metaphor correctly it is a little pessimistic.

Interestingly, the phrase ‘whip of the wheel’ also appears in the song “Biittersweet”. Amongst the harmonies on that, Becca sings the phrase ‘diamond ring’. Having followed them both on Facebook for a while, I don’t think that they have announced an engagement, so could be the songs aren’t quite as autobiographical as I thought.

There were four tracks on Sam’s Paper Wings EP. Becca sang on just two of the tracks. “I Can See Your Heart” and “I Just Want To Let You Know Before I Go” were the other two tracks, so their inclusion on “Blackbox Memories” means that there are now versions of all four songs which include her.

The way I tend to write reviews is normally to listen to the album whilst I’m typing. The trouble I have had in reviewing this record is that every time I listen to it I get so deeply involved in the music that three quarters of an hour flies by, the record finishes and I find I’ve not managed to write a single word. This music is almost too beautiful to be able to review.