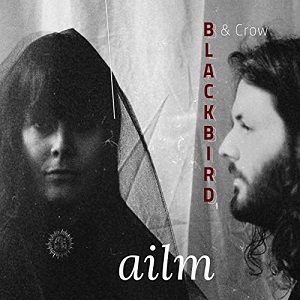 
Every so often, along comes a record that kickstarts the jaded palate of the timeworn reviewer by convincingly binding the ancient and modern with true cognisance of the relevance of both. Ailm is one such record.

Blackbird and Crow turns out to be a duo from Co. Donegal consisting of (respectively) singer Maighréad Ní Ghrásta and multi- (stringed) instrumentalist Stephen John Doohan. They were discovered by Clannad's Moya Brennan, and in 2017 they released their debut CD Shock Shatter Convince (which was presciently titled for positing a typical potential listener's reaction!). As for followup Ailm, that word in Celtic tree lore denotes the resilient conifer, being associated with healing but also emblematic of progress and a spiritual journey. The duo's music is intense and full of impact: truly iconoclastic, with primal force and thrust, while also deeply consistent with the wellspring of tradition. Ailm's ear-grabblng opening gambit finds Maighréad adopting the persona of a harlot and a witch, intoning her defiance to the backdrop of dirty distorted blues-slide guitar and stomp-box, building to a full-throated wail of song. Extraordinarily arresting. The sense of being uprooted in your very tracks is profound, and the shocking viscerality of that ear-shattering musical and lyrical experience remains unmitigated by the eleven songs that follow, even though several of them inhabit an altogether gentler musical climate. The sense of potent mystic and serious strange beauty is overpowering, overwhelming, at times inexorably threatening to explode (as into the rough-and-tumble-gypsy finale of Blackbird).

Within a context of ruthlessly honest self-exploration that's both perennially relevant and steeped in folk-memory, the album's lyrics (mostly penned by Maighréad) are drenched in harsh alienation and strive to make sense of themes such as addiction (Princess Of The Ditch, a Richie Healy cover) and fated or fatal attraction (The Planter & The Runaway), climaxing with Parting Rag, a curiously affecting cri-de-cœur to Shane McGowan. Maighréad is an awesomely powerful and uncommonly expressive singer, and while the intrinsic "Irishness" of her delivery may at first appear cast from a parallel mould to Lisa O'Neill or Lankum's Radie Peat, it also embraces the crooning seductiveness of Margo Timmins (as on the soulful, sax-sodden Sweet Surrender), allied to a defiant strength-in-vulnerability (on the devotional Mo Chuisle) boosted by a soaring, keening quality (as on the sinuous Mór Ríoghain, the Robbie Basho cover Orphan's Lament and the album's disturbing final statement The Ways That I Can Make You Suffer). Stephen's supportive and boldly atmospheric instrumental arrangements are utterly in tune with Maighréad's particular vision: sometimes drone-folk-based, sometimes full-on White Stripes mode, often intentionally experimental in an almost psychedelic sense (cue possible invocations of Cale/VU or early Beefheart), and involving cameos from other musicians (violin, uilleann pipes, low whistle, cello, piano, harmonium) alongside Stephen's own accomplished embellishments.

Ailm is a seriously thrilling ride. Maybe not (quite) "folk as you know it", but eerily absorbing, compulsive listening to the point of addiction - and then some!