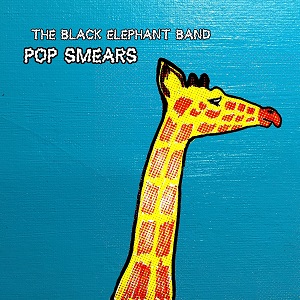 
Hailing from Nuremberg, Germany is The Black Elephant Band which contrary to the name, is a solo performer which sets the album on a surprising start...and to finish.

The Black Elephant Band is not your average folk musician, leaning towards Anti-Folk, a misunderstood genre which tends to be the antithesis of standard folk music which said to have originated in New York in the coffee shops as a reaction to the American 'Folk Revival'.

Armed with only a guitar and a harmonica, songs like 'Micheal Keaton' and 'Lovethigh Neighbors' start the album on a good footing with a humorous take on who is the best Batman actor and elderly neighbours who keep you up all night with loud sex.

'Berlin Cops' is a full band performance, akin to The Ramones, which solidifies The Black Elephant Band's outlook to American music. Throughout this album it's refreshing to listen to an album which makes you laugh, question and think. 'I Am A Human Being' tackles gender politics and acceptance as a whole, though being a rather quaint affair ''I'm white and I'm privileged, I'm black and I'm not, I'm fat and I'm skinny and ugly and hot, I'm rich and I'm famous, I'm poor and I'm sick, I have a vagina and I have a dick, but I'm a human being and life is pretty tough'' it speaks from the heart and gets straight to the point.

'Stuck in the Rock n Roll Office' is a fantastic song which tells of the tale of being a professional musician in modern times ''Self-management is the way to go they said, keeps you from drugging up your tours, ending up dead. The only thing that could still kill you of course, is a paperwork overdose'' and is one of the many highlights on this album.

The album consists of 19 songs, which on the surface seems needlessly lengthy however, most of the songs last around 2-3 minutes, short, punchy, sarcastic, sardonic, uplifting or side-splitting.

The Black Elephant Band manages to keep relevant but also niche with most of the references about DIY musicians, writing music, preppers, mixtapes or youtube videos as 'Elephant Caught on Tape' professes but also manages to have a knack of writing pop songs, catchy, authentic and layered with unorthodox hooks and lyrics that nobody else seems to be writing.

This album is a real find.

'Pop Smears' lives up to its name...and then some.