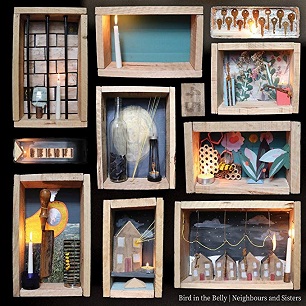 
Over the last fifty years Brighton has acquired a reputation for being at the forefront of youthful expression and popular music culture. Whether your own particular memories are of the sixties, and of the mods and rockers immortalised in The Who's Quadrophenia, or of Fatboy Slim DJ-ing to 250,000 revellers on the beach in the summer of 2002, or perhaps of ABBA winning the Eurovision Song Contest inside the Royal Pavilion in 1974 with Waterloo, it seems that dear old London-By-The-Sea has always been synonymous with the biggest names as well as the next big thing. Sometimes it is easy to forget Brighton's past, and its history as a coastal market town and fishing port, and how the arrival of the railway turned it into a fashionable Georgian resort for the new fad of bathing in salt water. What of the area's previous musical heritage?

Fortunately, the area still has a thriving acoustic scene, and today one need look no further than to the 'revivalist' folk collective Bird in the Belly. Their debut album, The Crowing, served up a multi-textured feast of old and new, served with authentic flavours and titles like Shoreham River and Horace In Brighton providing local relish. The Crowing drew positive reviews, and went on to be named Folk Album of The Year by the Sunday Express.

This second release sees the return of the vocal pairing of Laura Ward (Hickory Signals) and Ben 'Jinnwoo' Webb, Ward's delicate timbre and unadorned strength once again fusing with Webb's raw gravel-edged growl to evocative and dramatic effect. They are reunited with Adam Ronchetti on guitar, percussion and shruti, and joined by multi-instrumentalist Tom Pryor, who also produced the album. Recorded at Brighton's Studio 95, Neighbours and Sisters is a richly seasoned second helping, once again inspired by little known songs and forgotten lyrics retrieved from such sources as the Roud Folk Song Index and the Bodleian Broadside Ballad Archive.

It is with a sparse guitar introduction that opener Robin and Starling begins, though Ward's voice is not far behind in this skulking tale of heartbreak and betrayal. It is followed by delicate flute floating over a percussive rhythm in Coal Black Wine, the tipple of choice for those lured by King Death himself. Also inspired by a song originally published in America is Bright Light, borrowing its chorus from The Little House Upon The Hill, a song that became popular over here during World War One and rediscovered by the band on a Sussex Traditions website. Simultaneously melancholic and optimistic, it tells the tale of a mother keeping a light burning for her son away at battle.

Balanced against these emotive snapshots are grim songs tackling subjects such as the heinous crimes perpetrated against women within a Bethnal Green workhouse (All You Females); the fate of French highwayman Claude Duval, imprisoned in Newgate Prison before being hanged at Tyburn (New Gate Stone); and Ben Webb's original composition 45 George Street, the moving tale of John Smith and James Pratt, the last men in England to be executed for sodomy. Contrast these again with the majestic Phoebe to Phyllis, defiantly describing the plight of women turning to prostitution in the face of poverty; the tragic tale of lovers falling through broken ice in They Slept in the Frozen River, and Laura Ward's mystical account of apiaristic superstition in Bees, and we have ourselves a distinctive and arresting collection which rightly puts Bird in the Belly, and Brighton, back at the forefront of the English folk music scene.