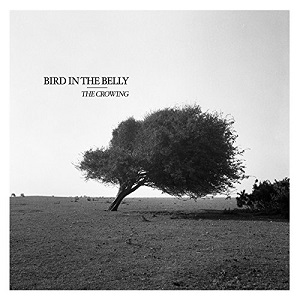 
Bird In The Belly is an intriguingly different folk collective. Its members include the Brighton-based duo Hickory Signals (Laura Ward and Adam Ronchetti), whose own debut album Turn To Fray has just been released to not a little critical acclaim, and the lineup is completed by alt-folk performer Jinnwoo (Ben Webb – who’s also Brighton-based), multi-instrumentalist and producer Tom Pryor, and audio/visual artist and sometime musician Epha Roe. They all came together at Cecil Sharp House when invited to play in their former incarnations as part of a celebration of young folk artists organised by Sam Lee’s Nest Collective.

The collective’s stated mission is to reignite forgotten British voices and reintroduce their lost stories into the contemporary folk canon. They set about finding and recording Britain’s forgotten stories (meaning traditional songs and folk tales that have either never been recorded before or have been but scarcely recorded) by searching archives, libraries, book sales etc and by interviewing folk legends such as Frankie Armstrong, June Tabor and Lisa Knapp and folk music experts such as Rob Young and fRoots editor Ian A. Anderson on their journey across Britain. An ambitious mission, and it’s not easy to assimilate – or prove its success – when listening to the resulting collection of songs, all of which come across as original compositions much in the mould of the late-60s/early-70s folk revival with a touch of alt-/psych-folk, rather than sounding particularly traditional per se.

The at times quite visceral impact of these compositions is to a fair extent down to Jinnwoo’s very distinctive (and quite un-folky) vocal, probably best described as a slightly abrasive snarling drawl (for Jinnwoo takes a good proportion of the vocal leads). This is both a foil for, and an enhancement of, the songs’ drama, and the instrumental scoring – mainly involving just piano, violins, acoustic guitars and flute, with glimpses of harmonica and autoharp – is both cautiously rich and spacious. Laura’s own vocal contributions are by comparison more conventionally folk in character, but still not without the thrust of a more forthright presence when desired. She impresses especially on songs like Irish Emigrant and Old Squire. Additionally, on many of the songs her voice blends surprisingly effectively with that of Jinnwoo. Their combined harmonies are also compelling, as on the a cappella first half of the album’s animated opening song Give Me Back My Heart Again, the closing song The Lilies (recorded live by the edge of the ocean and its crashing waves), and on several ensemble passages during the course of the album.

By dint of the recording and release of this album (let alone a forthcoming documentary film), Bird In The Belly’s exhumation of these forgotten texts is proved to have been a most worthwhile endeavour, and the stories are ones which need telling, even though I can’t help feeling that the melodies may need more time to embed themselves in folk consciousness – in other words, their work will definitely repay further effort on the listener’s part.