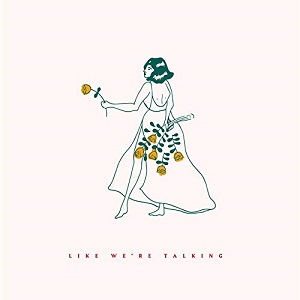 
Originally from Omaha and now based in Nashville, this is Phillips first release in over five years and, while it only features one song for every year's wait, the quality level is high.

Featuring Ethan Jodziewicz from the Milk Carton Kids on bass and producer Dan Kobler on acoustic and baritone guitar, it opens with the gently undulating title track, one of two co-writes (there's three but 'Sandhills' is only on the vinyl version) with Robby Hecht (who also provides harmonies), muted rumbling drums, acoustic guitar and weeping baritone guiding the wistfully sung melancholic lyrics from the perspective of a loved one who has passed on, offering reassurance that they're still there with those left behind.

It's slightly more musically upbeat for 'Yours To Forget', which, while dreamily sung, is, fuelled by her own break-up heartache, a number about a woman powerless in her relationship to the indifference of her lover as she sings "you are not mine, but I am yours to forget".

Riding a scratchy guitar chug, 'Someone Like You' is the second Hecht co-write, a ray of happiness amid the generally surrounding sadness and delivered by Phillips with a radiant airiness before the focus shifts back to childhood memories with 'We Don't Stay', a Natalie Schlabs co-write that reminscences on the house where Phillips and her sister grew up in Nebraska as the changes that come with the passing of time.

That sense of growing up, growing apart and of leaving crystallise in the final track, 'Seeds', another pared back number that muses on the heartbreak of losing love, letting go and saying farewell, focusing on the emotional journey rather than the reasons. After the long hiatus, the good news is that, following on from rekindling her creative spark, she's already working on a new EP with Neilson Hubbard. Hopefully leading to a full album's worth in the not too distant future.