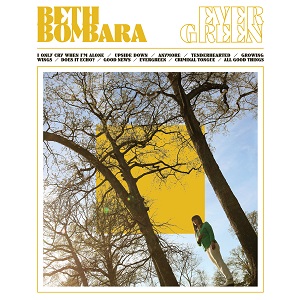 
Another album resulting from the artist shutting themselves away in a remote cabin, here in the Rocky Mountains and after which it's titled, the Michigan-born, Missouri-based singer-songwriter has assembled a rock n roll coloured collection of Americana in collaboration with guitarist Samuel Gregg, drummer Mike Schurklongtime bassist Kit Hamon and producer John Calvin Abney on keys.

Its amplified energy is announced from the get go with 'I Only Cry When I'm Alone', a midtempo country rock song about the public and private faces that heads into the similarly styled, slightly Stevie Nicks, 'Upsidedown' about shedding yourself of your "couldabeens". There's also a warbly Nicks' flavour to the guitar driven, gutsily midtempo balladry of 'Anymore'.

There's more of a country twang with the keys backed 'Tenderhearted, a hint perhaps of Patty Scialfa before the pace slows on 'Growing Wings' with its harmonies, lap steel and reverb guitar where she asks "what would you change if you could?" Things get moodier, darker and bluesier with the organ-tinged 'Does It Echo?' returning to funky rock n roll territory with the Stonesy riffs of 'Good News' before switching paths for the descending 60s pop chords of the title cut.

It ends with, first, another bluesy excursion into the Southern sass and sinews of Criminal Tongue and then, accompanied almost solely by church hall piano notes, the plaintive 'All Good Things' which, echoing her earlier observation of "All this progress, but nothing new" challenges Trump's rhetoric to ask"If this is great again then where did we begin?" adding "No time like the present/to kill for my attention/So if that ain't presidential/Than I don't know what is." Evergreen is defined as being universally and continually relevant, which seems a good enough tag to hang on this.

I Only Cry When I'm Alone/Upside Down