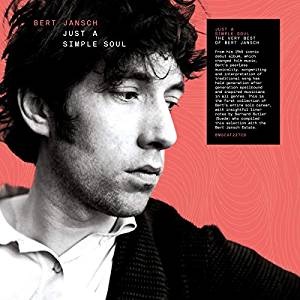 
Since Bert Jansch's death in 2011 there has been a major attempt to document and re-evaluate his career. This year has seen the release of two, 4 CD box-sets of his work from the 1960's and early 1970's: A Man I'd Rather Be, volumes 1 and 2. These follow the 2017 release of his 1990's and 2000's albums in the two volumes (again 4 CD's apiece) of Living in the Shadows - all on Earth Records. And, of course, his work with genre breaking folk/jazz/rock group Pentangle is also available on 2017's 7 CD set on Cherry Red. So you may ask why we need another collection of Jansch's work. Allow me to attempt an answer………..

Bert Jansch probably stands out as one of the seminal influences in folk, rock and jazz. Together with Davey Graham and John Renbourn, he not only created modern finger-style folk guitar, he was a major direct influence on Paul Simon, Jimmy Page, Neil Young and many others (he even played with Pete Doherty!). As a founder and major writer for Pentangle, he took folk into jazz, soft rock and beyond. Over some 30 albums (including 21 studio albums) he created a body of work admired throughout folk and acoustic music. He was also a brilliant guitarist, often writing in unusual time signatures, an evocative singer, and always brought a strong blues feel to his work. He has been included in well over 30 compilation albums - including several of his own. And, since 2011, his life and career have been subject to serious reappraisal, giving true perspective to his importance in modern acoustic music. Indeed, this retrospective praise began in his final decade: he twice received Lifetime Achievement Awards at the BBC Folk Awards: in 2001, for his solo achievements, and in 2007, as a member of Pentangle.

This compilation samples 39 tracks spanning the whole period of his career, taken from 17 of his 22 studio albums. CD 1 covers his early career, from the mid-6o's up to 1973's Moonshine. All 19 tracks are taken from his massively successful spell with Transatlantic Records. There are 8 tracks from his first 3 ground-breaking albums, with obvious favourites like Anji and Needle of Death from his debut album. His third album featured Blackwaterside (later covered, of course by Led Zeppelin and Sandy Denny) and Notamun Town (covered by Fairport Convention on their second album. Much of the repertoire is traditional, and reflects Bert's Scottish heritage - but is often played with a bluesy guitar or banjo. Two tracks are taken from his collaboration with John Renbourn - an album which underscores the way in which these two adapted medieval lute styles to modern folk playing, and even jazz, presaging as it did the duo's future success with Pentangle. The remaining 9 tracks continue the style of these four breakthrough albums, but tended, at the time, to be swamped by the greater publicity and sales afforded to Bert's work with Pentangle.

CD 2 Starts with tracks from LA Turnaround; with the demise of Pentangle, Jansch returned with one of his finest albums, accompanied by a band of fine session musicians, and with production mainly from Michael Nesmith (hey, hey, it's the Monkees!). If you doubt these accolades, check out the tracks selected here: the traditional Fresh as a Sweet Sunday Morning has a slight country feel; Chambertin is a solo acoustic instrumental; and Blacksmith is a bluesy country rock-style version. Perhaps subsequent tracks from the '70's and early '80's show a tendency to seek new and innovative production - steel pans on 1975's Baby Blue, or Albert Lee's electric guitar on Up to the Stars (1982) - but the quality of the writing is still there. And a perusal of the full track list from the later albums shows a continuing strong reliance on traditional songs, as well as new treatments of Bert's old favourites. It was his brush with death in 1987 that caused Jansch to totally give up his heavy drinking - and heralded another renaissance. This can be seen in the tasteful playing, and still strong vocals, in his late albums - tracks such as High Days and The Black Swan from his final (2006) The Black Swan.

If you are unfamiliar with the totality of Bert Jansch's solo career, or don't yet possess any of his albums, then Just a Simple Soul is the perfect place to start. If you do buy it, you will not be disappointed - and it's a fair bet you will be tempted to explore the full albums, available on the other compilations mentioned in my introduction.