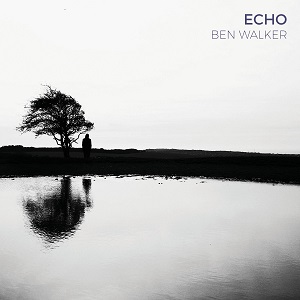 
Ben Walker, who first came to my attention in a duo with Josienne Clark, has been described by Total Guitar Magazine as "one of the best acoustic guitarists in the world right now". Ben himself describes what he does as finding the past in the present and putting old jewels in new settings. I'd add a touch of looking into the future and state that there is lots of evidence for all of these claims on this stunning album.

"Afon" is a perfect piece of nimble fingered acoustic guitar with Double Bass accompaniment. Ben's fingers fly quick and dexterously, but there is grace and beauty too between the florishes and stops, not just blindly virtuosic notes per second. "The Echoing Green" featuring the first of the album's vocalists, is a very English, slightly melancholic, ode to the Village Green that eternal public space. Words by William Blake talk of time and the eternal cycle, connecting childhood and watchers of childhood. Thom Ashworth's fine voice and Ben's arrangement turns Blake's poem into a folk hymn to the Village Green. "Ha'naker Mill", from the singing of Bob Copper, is by Hilaire Belloc. Ben's guitar and Laura Hockenhull's rich voice conjours an atmospheric Folk Psych storm that is over too soon. Real "hairs on the back of the neck" stuff. " Rings" is a standout track, not so much pushing the evelope as shoving it into another dimension. The track opens with a crackly recording of George Maynard singing "A Sailor in the North Country", this grounds the piece in history and provides a springboard for Walkers guitar and a small string section to launch from. In quick succession we go from unaccompanied folk to classical to hypnotic minimalism. With the spirit of Gavin Bryars' deeply moving "Jesus Blood Never Failed Me, Yet" Walker links a voice full of life and humanity to a looping uplifting musical dance. Imagine the most structured sophisticated John Martyn echoplex guitar spiralling round a soaring violin. Imagine Pat Metheny's guitar bouncing off itself on Steve Reich's sublime Electric Counterpoint, or John Renbourn dueting with a blissed out Terry Riley in midflow. Guitar notes decay and cascade into electronics to be washed away by further waves of notes, it is simply beautiful. "Afon" may look back but "Rings" takes the guitar ever onwards. "Let Me In At The Door" is a bright and beautiful duet between Ben's guitars and Hazel Askew's pure voice. Again the song, layers and builds into a rich storm of notes to fall away again. "Cross Fell" is a contrast against, atmospheric guitar accompanies an emotional Cello, no trickery just nuanced thoughtful playing. "On Humber Bank" takes that Reichian resonant shimmering guitar with the amazing Laura Ward singing a "The Effects Of Love" a Broadside ballad. Looped and acoustic percussion creates a bedrock and the overall effect is stunning with Walker's appegeos ringing out. Jinwoo, the other vocalist from Brighton band Bird In The Bush, features on "How Stands The Glass Around". He is a powerful and striking vocalist, lending the piece an otherworldly quality. Ben is a fine accompanist, laying down understated lines and florishes on "The Island" and "Nurses Songs", a foil while Bella Hardy and Kitty MacFarlane, featured vocalists shine. "Eostre" with its resonant notes and harmonics is a final reminder that Ben Walker is a master of atmospheric guitar and a modest man leaving the last forty seconds of the album for strings, atmospherics, water and weather.

This is a, masterful album, a well balanced and sequenced set of guitar led music, beautiful nuanced songs and expansive experimental pieces. On a, personal note its forcing a late Re-jig of my albums of the year list