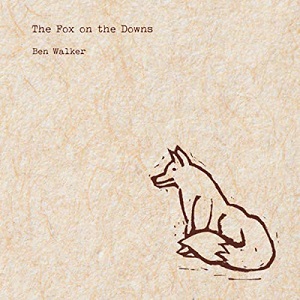 
The Fox on the Downs, recently released in September this year, is the new ep of superlative guitarist Ben Walker. His reputation for 'flawless' and unparalleled musicianship proceeds him, as does his BBC Folk Award win as best duo alongside Josienne Clarke in 2015. Signed with Josienne to Rough Trade in 2016, Ben has also produced over 50 albums for other artists and is a renowned composer and arranger. Idle hands he has not, and all this sets the stage for a well anticipated debut.

This rich ep has four compositions, two of which are arrangements of traditional pieces, the other half Ben's own compositions. The fact that the pieces hold so well together, standing strong both individually and collectively is further testimony to the level of artistry present. His writing of English tunes would fit happily in a modern day Playford collection (the hailed 17th Century publisher and composer) and his first track- A Trip to Nettlebed - is a graceful nod to such roots, being a stunning arrangement of an English dance piece dated 1755.

The second, Lachraimae Pavan, is a John Dowland (the lutenist and composer) piece from I think 1604 - a Pavan being a renaissance slow processional dance. It is a poised, almost melancholic piece, going around in itself with emotively moving, hypnotic ebbs and swells. It beautiful.

The mood is elevated by the jiggy, or is it reely (?!?), track 3 - the conjoined 'A Day at the Races/the fox on the Downs', which is almost obscenely good- so it turns out 'Total Guitar' was right in saying Ben is 'one of the best guitarists in the world right now'. The pieces are both intelligently conceived and sensitively delivered, the former a light and playful, the latter holding more tension and contrast, the whole ending in humorous but never the less astonishingly skilled implosion. Cracking live too I would imagine.

Last but not least, a duo of tunes- The Kings Cross/The Pepperpot is a gorgeous piece of work, baroque style and seamless, mesmerizingly adept and nuanced. A fitting end to an accomplished and beautifully crafted release, hopefully one which paves the way for more.