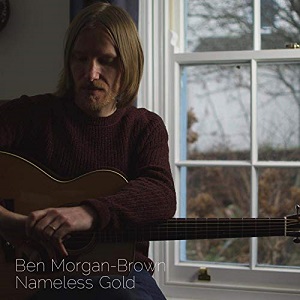 
The new EP from Devon singer-songwriter Ben Morgan-Brown is just a touch different. It was recorded in one morning live in the studio, with just a single guitar, and no edits, overdubs, or other voices. As with his last release, Cold Rooms, the new EP is full of warmth, intimacy and genuine emotion, helped in no small way by the way it was recorded.

There is something wonderfully (and typically) uninhibited on display, with Morgan-Brown never afraid to delve into the places that others instinctively shy away from. The title track is the prime example, inspired by his wedding ring which was recast using the gold from his late father's ring. The final song, Only So Young was inspired by a couple of photographs of his father, one of him holding Ben as a baby, and one from them side-by-side just months before he died.

Two of the tracks are instrumentals, perfectly highlighting the intricacies of his guitar playing. Windowsills will inevitably conjure up comparisons with Nick Drake, and favourably so. Let A Sleeping Dog Lie came from the only piece of music that his young rescue Border Collie Jake would settle down to. Part 2 grew from imagining what was going on in Jake's mind when he wouldn't settle down.

Ten Years Passing is the other track here, described by Tom Robinson as "beautifully written, beautifully played - brilliant." You can't argue with that.

Nameless Gold is a superb EP, with both beautifully sophisticated instrumentals and lyrics with an incredible depth of emotional honesty. It is the perfect showcase, with the kind of tenderness and poignancy that shines out in his live performances. If Ben Morgan-Brown is not yet a name that is familiar to you, it surely soon will be.