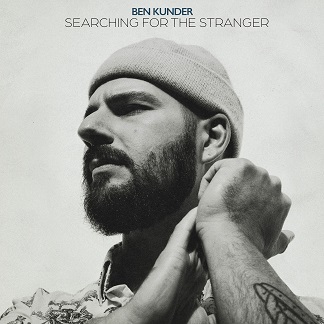 
On reviewing his last album I described the Ben Toronto-based singer/songwriter as at times reminiscent of Andrew Gold, his music echoing radio friendly, warmly sung and often soulful sounding 70s songwriter pop which you can lay back and sink into. I see little reason to revise that here, merely add to it.

The album opens with 'Berlin, a dreamy melody with its march beat punctuated by flashes of electric guitar it muses on finding himself in former East Berlin one Christmas and reflecting on "some forsaken tragedy, shadows of my past", referencing the tearing down of the wall in a musing on showing your feelings. Slightly more uptempo, tapping into his cascading falsetto, 'Stranger' could well be set in the same location as, backed by jangling guitar, he sings "This worn down city/Has got me thinking/If I pick up and leave/Will you remember me?", place and relationships intermingled ("Thought I went looking for salvation/I just wanted to be alone…For your love/I would leave the words unspoken").

Piano ballad 'Ghost' is the first of two numbers co-written with Mala Davies who sang backups on the last album, another reflection on a relationship, here on that has ended but won't stop haunting him, ("Why can't you get out of my head? You know I'm trying to sleep"), "feeling fine when I'm not thinking about you" but then "You call me over when you've got nothing better to do/Watching movies in the dark/And singing to the stars/And drinking wine too", the arrangement swelling towards the end with cymbals shimmering.

Strings set the mood for the softly sung Year (all the songs are one word titles), this time with the relationship tentatively still hanging in there despite whatever it was he screwed up ("Hard to believe with all I put you through/You'd still want me around"), as he avows "I'm still changing for the better".

There's an anthemic hint hovering around 'Breakers', a sort of cocktail of Petty, early Bee Gees and Crowded House with majestic keyboard waterfalls on a self-questioning as he asks "What did you sacrifice to pursue your dreams?/Did you know what you were losing?/Did you think your hands were clean?", a call to look within, to"Reach into the dark and find your light", and "remember what it means to fight" and not "surrender like breakers in the night"

Titled for a fishing port town in Nova Scotia, 'Lunenburg' keeps the narrative on a reflective not, here cast in the character of musician whose seen better times and bigger audiences, stuck there "With only fifteen pounds and this lithograph from 1835", vowing that "If I can make it through maybe I'll come home to you", followed by 'Seoul' where hazy echoes of Paul Simon sound through an enigmatic account of the singer being visited in hospital by a lover he's perhaps not ready to see ("I'm feeling fine, you can go on home…We've both been unkind, trying to right these wrongs/Why you make it so hard?"), perhaps wanting reconciliation(" I want to tell you everything, all that scares me, all my hopes and dreams") but adding "I feel so alone when I'm with you sometimes".

CS&N provide the template for the ethereally-sung chameleon-themed Colours, played against a spare guitar figure as the harmonies breeze in and out, then comes 'Tornado', the second Davies collaboration, along with Tom West which, perhaps logically, extends the comparison to embrace Neil Young on a song about basically how you have to know and love yourself before you can love others ("I can't be your savior until I know I'm safe/Until I build my shelter/Until I recognize my own face") , again evoking a relationship dynamic characterised by wounding barbs being thrown back and forth but which refuses to succumb to the inevitable ("I was caught in a tornado trying to get out/But it didn't want to let me go").

It ends with a kind of rebirth in 'Spring', a hymnal organ drone and walking drum beat backdropping arguably the album's' finest moment, reflection, acceptance and catharsis coming together in the hope of a brighter dawn, that "Maybe it's the time of year/When the seasons change it'll all come clear" and the realisation "You have to grow up too early sometimes", ending on the optimistic and euphoric note that while "This old dog still needs a fix …I'm learning how to love you better each day". Seek it out.