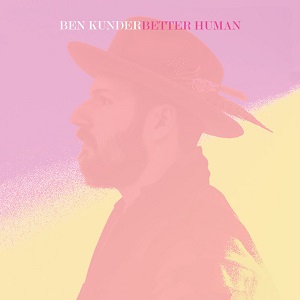 
A Toronto singer-songwriter, Kunder has a vocal at times reminiscent of Andrew Gold, his music shading to that same country hued 70s songwriter pop but also, as on Lay Down, coloured with a tint of Tom Petty. Here, aided by guests that include Oh Susanna, Sarah McDougall and Mala Davies, he serves up the sort of radio friendly, warmly sung and often soulful sounding material into which you can simply lay back and sink into.

Charting an overall theme of finding light at the end of darkness, 'Better Human' is a guitar and keys shimmering ode to self-realisation, it and the optimism-enrobed soulful pop ballad 'Better Days', co-penned with McDougall, sandwiching the more propulsive, synth backed 'Jessi'.

Addressing the divide between the face we show and the world we face, 'Hard Line' is classic arena piano ballad material that could as easily be sung by Take That as Brad Paisley. Indeed. the whole album is suffused with a romantic tenderness that soaks through the pores of 'Fight For Time' about finding a balance in life, the pedal steel slow country waltzing (and Cohen-referencing) hymn to comradeship 'I Will Be Your Arms' and the fingerpicked acoustic 'Come On', Kunder's soft vocal caresses complemented by harmonies from Carleigh Aikens. It ends with the overwhelming emotion of his first child's birth on 'Night Sky', but, as throughout, it never succumbs to sentimentality in its quest to become something better than we are. It has a human touch