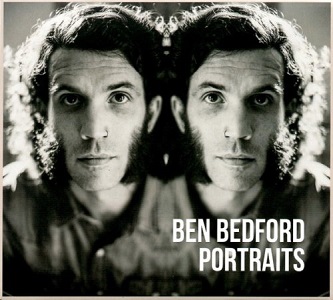 
Ben Bedford picks a mean guitar, writes good, workmanlike songs with excellent lyrics, and is possessed of a very agreeable, John-Denver-like voice. His lyrics have inspired at least one reviewer to propose him as the Poet Laureate of Illinois, and I'd have to say he'd deserve the nomination. He has had a successful career to date on the US side of the Atlantic.

Portraits is a "Europe-only" retrospective anthology of his songs from 2005 to 2012 and I would hazard a guess that it's being issued to provide a launchpad for a future tour over here. Still, if you're unfamiliar with this artist, as I am, a "greatest hits" album is probably the best introduction you'll get - and, since none of the material has been issued in Europe before, probably the only introduction available.

Much of the material on this release possesses real narrative power, the opener, Lincoln's Man, being a case in point. It's sung from the point of view of a young southerner from Charlottesville, Virginia, who's joined the Union forces while the rest of his family are for the Confederacy. He's Lincoln's man as a moral choice, but that doesn't stop him being critical of the Army's leaders, whom he sees as corrupt rakes, careless of their men's lives - a carelessness that eventually leads to his own death in battle.

There's emotional breadth too, from The Sangamon - about a man going to throw himself in the river of that name after his wife dies in childbirth - to Guinevere Is Sleeping in which a man dreams of returning to his faraway lover.

One of the most powerful songs was co-written with his wife, Kari. Land of the Shadows tells the story of 14-year-old Emmett Till, an African American from Chicago, who was brutally murdered for allegedly flirting with a white woman in a store, killed for being "just a northern boy, didn't mean a thing/ only seen Mississippi in magazines/ gonna tear his momma's heart apart/ in the land of the shadows, light and dark."

So, lyrically at least, a very strong collection of songs. However, I have to say that I feel Bedford's tunes tend to over-use similar chord progressions, and I would have liked to hear more variation in the emotional intensity of his vocal delivery. If he gave as much attention to their accompaniment as he does to his lyrics, I think he'd be a world-beater.