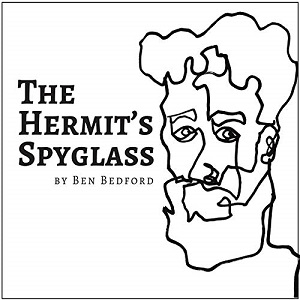 
Ben Bedford is another of those journeyman singer-songwriters who in the past 12 years or so has performed to audiences all over the USA, Europe and the UK. His biography tells us that Ben 'Establishes himself as a songwriter in the tradition of musical icons ranging from Bill Morrissey to Woody Guthrie, casting individual people in the theatre of the American landscape. A true son of the heartland, he dips into the deep inkwell of American Literature and writes with the 'old soul' quality of his literary idols, such as John Steinbeck and John Morrison'.

The Hermit's Spyglass is Ben's fifth studio album and his songs have gained local and national radio play with him being named one of the six Grassy Hill Kerrville New Folk winners at the Kerrville Folk Festival in 2018.

The Hermit's Spyglass is essentially a series of themed, loosely interlinked musings concerning a day in the life of Ben and his cat Darwin, all set in a little old farmhouse on the edge of the Illinois prairie. In keeping with this meditative approach, the 11 tracks, a mix of instrumentals and songs, are written and performed by Ben and if this all sounds a little fey on first reading, don't worry!

Opening track 'Morning Rise' enters on Ben's impossibly rich acoustic guitar part. He is a lovely player, embellishing the sonorous thump of his bass parts with lovely fills and runs in the manner of Davey Graham or Richard Thompson, and in later songs he also puts me in mind of Nick Drake. His voice is equally striking, something of a Neil Diamond timbre to it, and when he sings the opening lines, 'Out on the rise, West of the town' it's so literal that it's impossible not to be looking out from the front porch with him.

'Little Falcon' stretches things out more and drives through with a pulse reminiscent of Richard Thompson's 'Vincent Black Lightning' whilst 'Larkspur Awakes' is the first of several atmospheric instrumentals.

'Coyotes' follows, pushing through on a sharp strum, 'Morning Coffee' is back to a more meditative pace and when he tells us 'The coffee is on' you can almost smell it, then the courtly instrumental 'The Hermit's Cat' closes this little trio of mid album songs.

And so it goes through the remaining five songs, a mix of vivid instrumentals and little vignettes, lyrically spare but all the more emotive for that, with my personal favourite 'Morning Conversations' being a lovely example of everything on offer here.

The Hermit's Spyglass is a fine little album where everything has the feel of a master craftsmen at work. Clever songs, endlessly creative playing and a sense of time and place that adds up to a really quite moving listening experience.