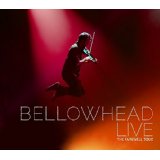 
After 10 years, folk supergroup decided to call it a day, with an extended farewell tour, a best of and finally a live 2cd 1dvd boxset "Bellowhead Live:The Farewell Tour" and a reputation for getting folk music out to a wider audience, surprisingly not always to the universal acclaim of the harder core folk audience.

Quite why is one of the big questions. Popularity brought bookings at festivals and bigger venues. They became a bit of a go to band for the mainstream media, but that's how mainstream media works. There are lots of great singer-songwriters out there, but sod it we'll go to Adele anyway, it's easier, the audience know who she is, she and Belllowhead, put bums on seats.

Ten years, is actually a remarkable time to keep a band of Bellowhead's size together, with remarkably few line up changes and having seen them play venues from as small as The Water Rat to the biggest festival stages, you knew they were capable of turning it on pretty much anywhere, including the studio.

As well as being a band of exceptional musicians, Bellowhead were a show, something that particularly comes out on the dvd section of "Bellowhead Live:The Farewell Tour", where you really get to see the interactions between the band members as well as the musical interplay.

Bellowhead took, predominantly, English folk music and breathed life into it, life from a passion and a love for the songs, as well as highlighting the disproportional use of the name Nancy in folk music, but there you go.

Bellowhead are still riding a crest of a wave and that's always a good time to call it a day, particularly if you can build a real event around it and both the tour and this three disc package really is an event.

With so many of the ban already involved in many different projects, you know that this isn't the end of the story for band members. There's also that feeling that out there somewhere is someone pencilling the dates for the reunion tour, but until that happens, if it happens, let me make one quick recommendation, "Bellowhead Live:The Farewell Tour" will be a great extension to your collection.