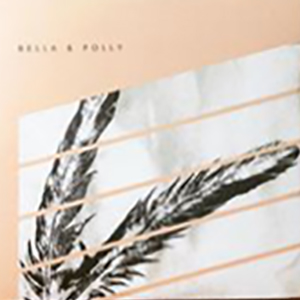 
Bella’s come a long way in not so many years. From tentative and somewhat derivative youthful-s/s beginnings in her home town of Bradford, she’s blossomed into a singer and musician of some stature, releasing her impressive second album Heaven Knows in the summer of 2017, also performing with Midlands-based band Bric-a-Brac, and now displaying an even more persuasive personal identity. At least some of this I believe may be attributed to her more recent (autumn-2017) meeting and teaming up with young York-based mandolin player and singer Polly Bolton (one-third of progressive bluegrass trio Stillhouse). This “meeting of like minds” developed fast after an initial backstage jam into an intense musical friendship, and Bella has subsequently wholeheartedly embraced bluegrass and Americana stylings into her own armoury. The two ladies’ debut joint EP came out a few months ago and has given me much pleasure since it arrived, but I’m ashamed to admit this review has been even slower in arriving through my fingertips.

Bella and Polly proudly proclaim themselves to be a “guitar-and-mandolin-led Celtic bluegrass fusion duo”, which as it turns out is strictly correct and yet also a perhaps needlessly modest description that sidesteps the ladies’ vocal prowess, both singly and in harmony. This five-song taster-EP sets out their stall pretty well, and shows them to be a very natural and complementary combination of talents, one that promises much for the future. It presents a pair of bookends that at first glance of the track-list would appear to be traditional songs (but they’re not exactly – see below). In between these bookends is a varied programme which symmetrically sandwiches two rather fine original songs and a suitably nifty breakdown-style instrumental (Shuffle Set). Bella and Polly excel on all counts, and although it’s Polly’s mandolin prowess and the vocal contributions that stand out the subtler quality of Bella’s guitar playing can’t be underestimated either.

As for the above reference to the traditional titles, I’m guessing that Bella and Polly do rather like to confound (or play with) your expectations, for not only does their take on Two Magicians (that’s the “bide, lady, bide” version and not the “coal black smith” one, by the way) spring some delightful surprises in its phrasing and syncopated arrangement, but the final track, Polly On The Shore, turns out to be not the “trad-arr. Fairport” ballad but instead Lester Simpson’s portrait of a powerful lady who takes advantage of the hapless sailor!)! The ingenious, adventurous arrangement of POTS begins in measured a cappella mode, gathers pace before climbing up into a lively dance-coda melding John Kirkpatrick’s Jump At The Sun with (I think) the jig Zelda. The two originals provide a good contrast between the deliciously Appalachian-flavoured Fall On My Knees and the more newgrass-influenced Run River Run. (Unfortunately, none of the tracks are given composition credits, so I won’t make assumptions from the unknown.)

Even since releasing this debut EP, Bella and Polly have moved on – they’ve been joined on the festival stage by the talented cellist Sarah Smout, and I believe there was even a plan to expand to a four-piece (with the addition of a fiddle player) last autumn – tho’ I’ve not been able to keep up with that development as yet. But whatever the New Year brings for Bella and Polly, it’s sure to bring some really exciting music-making.