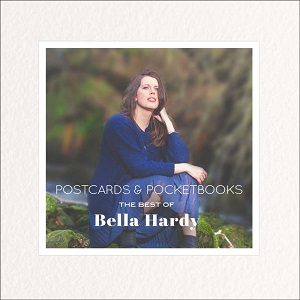 
2014 BBC Folk singer of the year, winner of best folk song of the year in 2012, Bella Hardy has released a sucession of strong albums since her debut solo album NIGHT VISITING in 2007. POSTCARDS AND POCKETBOOKS, is a timely best of, an opportunity to look back over twelve years of releases from this fine musician, singer and writer.

"Learning To Let Go" from 2017's HEY SAMMY and "Whisky You're The Devil" released on BATTLEPLAN in 2015, are modern sounding, with big production choruses and a driving very infectious pulse. "The Herring Girl" released on 2011's Songs LOST AND STOLEN, is more firmly within the Folk tradition, a dark tale of misadventure and sexism, given atmosphere by Kris Drever's guitar and Chris Sherburn's evocative Concertina. Drever's driving guitar also drives 2012's hunting song, "The Driving Of The Deer". Bella is on superb vocal form throughout this set, her reflective tone on "First Light Of The Morning" from 2015, along with Ben Seal's banjo and some gloriously bucolic brass creates a superb atmosphere that blends Americana and a very English music. "Silvie Sovay" recorded for 2009's IN THE SHADOW OF MOUNTAINS is an emotional duet with Emma Hardy that plays with the traditional song "Sovay". "The Darkening Of The Day" recorded for WITH THE DAWN in 2015 is another arresting arrangement with stirring brass, suggesting the rising of the sun, raw banjo and a beautiful vocal from Bella. The circling fiddles and viola on 2007's "Maying Song" are a swirling delight part Folk part classical trio. "Jenny Wren" is another stirring tale, with beautifully arranged vocals from Corrina, Hewat and Bella.

"Guan Guan" recorded in China, with Chinese and American vocalists and musicians is evidence of Bella's exploratory and experimental side, as well of course, as being a fine listen. "Full Moon Over Amsterdam", originally from the 2011 SONGS LOST AND STOLEN album is here is a vocal and guitar 2019 revisit. Sam Carter's guitar is spot on and Bella's vocal, almost jazz torch singer is stunning, possibly a collection highlight. Riding on complex layered arrangements, or centre stage and laid bare Bella Hardy is an assured and powerful vocalist. "Sheep Crook and Black Dog" is likewise previously unreleased and an unaccompanied voice revelation. Like "Full Moon Over Amsterdam", "Three Black Feathers" is a new version of a song previously recorded, this time for Bella's 2007 debut album. Again the 2019 version is a delight, Sam Carter's guitar playing is beautiful and Bella's richer vocal is stunning. "The Only Thing To Do" from 2015's WITH THE DAWN, is a complete contrast. The lyrics speak of new sounds that felt like old sounds , the music is a Portishead like noir collusion of beats, electronics and brass. Bella's vocal, affected or acoustic, seethes with menace L. Another collection highly from a constantly shifting and searching artist. "The Drunken Butcher of Tideswell" from 2012's THE DARK PEAK AND THE WHITE, has an inventive driving bass and hand percussion beat, part Psych Folk part Jazz.

"True Hearted Girl" from BATTLEPLAN is a smooth almost seductive take on the traditional "When I Was On Horseback", instruments swirl and Bella just croons like a jazz club torch singer. "Queen Of Carter's Bar" is a singer songwriter masterpiece, inventive percussion, solid electric guitar and classy vocals from Hardy and Iain Thomson, with a five lyric peppered with folk imagery. "Oak and Ivy" is classic folk, savage and beautiful Bella's voice floats over harmonium and fiddles. "Lament For Derwant Village" from 2012, is a stunning memorial for the village flooded by the building of the Ladybower Reservoir. Kris Drever and Bella provide the vocals over a hymn like minimal piano and some atmospheric strings, the whole is utterly affecting. Hypnotic in a different way is the earworm chorus of the beautiful "Good Man's Wife", that brought to mind Kate Bush's "Army Dreamers."

"Walk It With You" is sublime, a Western Swing like jazz and county duet with Drever's vocal and perfect guitar. This has low lights encore and future covers standard written all over it. Stripped of its brooding atmospherics and given a bluegrass minimalist intensity is "Time Wanders On" a 2019 version for this collection of a 2015 song. Brooding still is the bleakly atmospheric, almost cinematic "Low Down In The Broom", the instrumental and Bella's vocal drip with emotion and potent, crying out to be picked up as a TV or Film theme. Through this long, languidly paced song the tension and atmosphere is allowed to simmer and build In a triumph of sequencing the slow tempo eerie anti war "Jolly Good Luck To The Girl Who Loves A Soldier" from 2015's WITH THE DAWN, follows. Like folk's Guy Garvey Bella delivers the sombre words over brass and clattering electronics on another classic in the making. Stripped of jingoism Bella Hardy bows her head and reflects on lost loves on both sides of the conflict. "Redemption" a beautiful uplifting song from 2017 continues this set of mood music, reflecting on love's triumph. "Tequila Moon" is another smooth jazz folk tune collected here for the first time, with Bella Hardy in fine voice on this smooth lullaby for insomnia.

Connected by Bella Hardy's stunning voice this is an expansive set that demonstrates her considerable ability as a writer, performer and weaver of atmospheres. For the first time listener this is a complete honey trap, and before you know it they'll be investigating the strong back catalogue these tracks are drawn from. For the Bella Hardy fans there are the 2019 versions, testament to her ability to find new ways through older material and the newly presented "Tequila Moon." Very highly recommended.

Jolly Good Luck to the Girl That Loves a Soldier