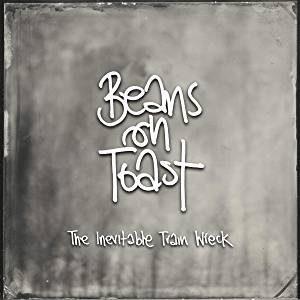 
The prolific and passionate Jay McAllister has served up a Beans On Toast album without fail every year since his 50-track debut 'Standing On A Chair' was released on December 1st 2009, his 29th birthday. He has celebrated every year since with a new album released on that same date, and this year's present to us is a collaboration with musical siblings Lewis and Kitty Durham (of Kitty, Daisy and Lewis). The result is possibly the most rocking, upbeat protest album that you are likely to hear.

Beans on Toast have performed at every Glastonbury Festival since 2007, and have toured the UK relentlessly over the last six years. He has played to thousands, and is regularly heard on 6Music and XFM as well as on BBC Radio 1 and 2. Yet, somehow, Beans On Toast remains comparatively less well known than other protest stalwarts like Billy Bragg and Frank Turner. Perhaps his anti-folk followers are keen on protecting him as 'one of their own', or has the name been mistakenly interpreted as flighty or frivolous by the uninitiated. But Beans On Toast most definitely deserves to be heard. An ability to hit raw nerves whilst delivering razor-sharp songs of politics, drugs and love, whilst shining a powerful spotlight on the shortcomings of our society, is a rare gift that should be shared more widely.

In bringing the Durhams on board, and by using their vintage analogue recording equipment, 'The Inevitable Train Wreck' is able to tap into a rich musical seam of sound inspired by iconic artists like Chuck Berry and Otis Redding. Integrating these within themes of contemporary concern creates a protest album with a vibrancy and vitality rarely heard. It becomes Beans on Toast's most pertinent and peremptorous protest album yet, once again pricking consciences with acerbic observation, but this time delivering lyrical precision alongside infectious melodies and a defiantly upbeat sound.

Opener 'World Gone Crazy' is a rocking state of the nation address that sets up its stall with issues that currently challenge and divide this country, and that threaten the existence of the planet itself. 'England, I Love You' reminds us of the hottest day of the summer of 2019, a day that coincided with Boris Johnson becoming our unelected leader and taking over at 10 Downing Street. The title is intentionally ironic, and the accompanying video features a deceptively tranquil series of paintings by the wonderful Kate Chidley.

'Extinction No.6' is a tribute to Greta Thunberg, reminding how it is our children and grandchildren that depend on our response to climate change and our continuing failure to reduce the use of fossil fuel. Leave it in the ground is the refrain that becomes a message to governments and global oil companies alike. However, 'Take Your Shit Home With You' is clearly aimed at those youngsters who still believe it is OK to buy a £30 tent from Argos, only to abandon it with all their other rubbish at the end of their festival weekends.

'Rich vs Poor' is solid ongoing protest material, but 'Saying No To Robots' and 'Logic Bomb' share modern concerns regarding factory production lines run by artificial intelligence, and of computer systems crashing or being hacked into. But in between the protests and fears nestle anecdotal gems like 'Lost Poetry Department', the tale of a briefcase accidentally left on a train at Guildford; and a gentle slice of life counselling in 'Mountains' where we are encouraged to carve our path onwards and upwards, despite obstacles that might lie ahead.

The 'inevitability' of the train wreck referred to in the album's title is considered within the closing two tracks. 'Truth Be Told' becomes a redemptive and heart-felt appeal for love, truth and honesty, with a strong emphasis on family, and buoyed along with a honky-tonk piano; and the rousing 'On and On', still aiming barbs at Johnson, Trump and Co, but reminding us how, paradoxically, more people now die of obesity than of starvation, and how more of us succumb to treatable disease despite increasing global stockpiles of medication. It is a reminder of the magnitude of work still to be done, of inequalities that continue to exist, and how the baton of responsibility will inevitably be passed on to our children, and to successive generations after that.