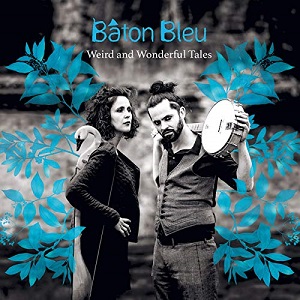 
Weird and wonderful – that tag normally means just up my street!! And so this one proves, but it’s taken me a few months to even get close to setting down some thoughts in strongest possible recommendation for this distinctly oddball yet incredibly mesmerising disc.

OK, let’s take a punt – try to imagine swamp and delta blues colliding with primitive and maverick indie, Handsome Family and Tom Waits meet Sister Rosetta Tharpe in a world-music toyshop or Harry Partch instrument factory and just let loose in all sorts of hitherto undreamt-of places. And there’s a line in the accompanying lyrics booklet, in the background note to the album’s fourth track, Sarakiniko, suggesting that “to reach those hidden places you must know how to get lost”. Think about it… there’s more truth in there than meets the ear.

So here’s the gen: Bâton Bleu is a duo consisting of Maria Laurent and Gautier Degandt, neither of whom had previously crossed my personal radar (I’ve since learned that Maria is a member of French trio Meïkhâneh, who certainly merit further investigation). They both sing – their amazing voices are like sweet’n’sour, gruff’n’gripewater, and manage to be both massively contrasted and massively complementary, which is no easy feat! – and accompany themselves on an extraordinary array of instruments ranging from banjos, guitars, bass harmonica, flute, glockenspiel and feet-percussion through to thumb pianos, aulos (a twin-reed instrument of ancient Greek origin, rather like the Armenian duduk) and the Mongolian lute (tovshuur) and viele (morin khuur), all sounding out in a resplendently weird and wonderful (there’s that phrase again!) noise, brilliantly defined in a sharp, crisp recording that has abundant presence.

Of course, they don’t play safe either – and there’s a surprise round every twist and turn, a corner round every corner. Their music’s much of the “just when you think you know where it’s goin’ they play a blinder and scoot off in another direction” variety. You can hear all sorts of things in there, from bizarre old-time to mystical Africana, tribal punk to devil-driven delta (there’s even an imagined dialogue with Robert Johnson). This is imaginative, minimally-scored meaningful music-making that makes its point through ear-grabbing gestures and unbelievable intensity but it never feels like posturing or empty weirdness-for-weirdness’ sake. Hallucinatory strangeness, tinkle-tangle, Françoiserie, delectable earworms aplenty. Follow that drinking gourd down the underground railroad. Take the knowing references and near-namechecks (“the captain’s just awaken with a beef heart and a white face” on his Sick Ship!). Other homages – to collector of American folk music Harry Smith and bluesman Seth Augustus – shift and absorb musical traditions as musical coincidences and cross-connections are dragged feet first. But the piece titled Mark Twain is probably the strangest – a traditional worksong used by pollsters on Mississippi paddle-steamers, whose arcane rhythms feel primordial, and which notes the name as denoting the measurement of two fathoms. The two-part Trouble All The Time, inspired by Bob Lee Junior Blues, encapsulates both sides of the coin, the “feel alive, feel good” sensibility of keening and stomping blues modes. And you can just lose yourself in the cool harmonies and chanting and that droning aulos on Sarakiniko. It’s real stimulating stuff!

If the above don’t tempt you, then there’s no hope! This is an extraordinary record – you need to hear it! Again and over again. And don’t you dare miss out on the closing track, a gloriously wildcard account of Johnny Cash’s Ring Of Fire that’s as unexpected as it is brilliant.