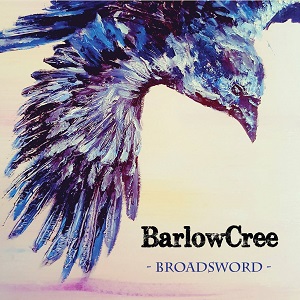 
BarlowCree - the duo of Liam Millinship and Johnny Matthews out of Cardiff. Known for performing their own songs amidst adaptations of traditional folk songs. And an apt tile too; broadsword indeed - a double edged (and naturally, broad) blade in human form. Given the X Factor and house buying test of 'you know within the first few seconds', they get the thumbs up seal of approval. The opening bars of 'General Wolfe' deliver the goods, so prepare to sit back, relax and enjoy rather than face a test of endurance.

Launching into a driving Lakeman-Knightley South West folk style in the first of a half dozen adaptations of traditionally lyric-ed songs, both '…Wolfe' and 'The Lass Of Swansea Town' segue seamlessly into the first of a selection of originals, the Millinship guitar/bouzouki ringing , nay pealing, clearly on the gorgeous 'Crashing'. To be honest, the opening trio is a combo that prove difficult to resist flicking the repeat button on the old CD scanner. Great start.

The originals don't vary too much from the tried and tested - 'Queen And Country', a sailing tale complete with hauling away and calling horizons and 'Man Of Steel' (not Clark Kent…) is a lilting homage to the strength and hardships of the working man whilst at the same offering fatherly advice. They lead 'Broadsword' in a more mid paced direction on its journey to the close with the intimately delivered and stately 'Starry Night'. It might ultimately turn out to be a smoother ride than anticipated from the lively pace set by the early highlights as the album settles down to not quite sedate, but a more relaxed vein. Nonetheless, there's enough in the promising combination of the traditional with the self written material to give them another foothold to building their audience.