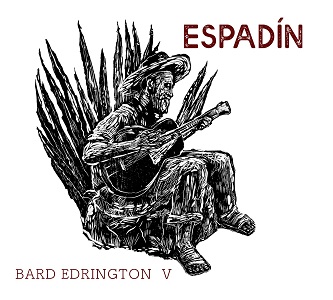 
Blessed with a sweet voice that double tracked sounds like a Country JJ Cale, Bard Edrington V is an interesting listen from the start. Drawing on his childhood home of Tennessee, taking in musically the Appalachian Mountains, the culture of Mexico, rural California and the historic frontiers Bard tells big stories through rich captivating music. Carried by that characterful voice and a infectious fiddle ‘Maidenhair’ is a beguiling opener. ‘Eyes On The Road’ is a valve amp rocker, with a nod to the verses of Led Zeppelin’s ‘Rock N Roll’, but shot through with dusty roadhouse integrity not UK imported blues bombast. ‘Riverside Blues’ is perfect folk blues, a beautiful picked guitar and that melancholic fiddle are two reasons why this track is a album highlight. At least one of many. The other is the way that Bard’s weary troubadour vocal sits with Sarah Ferrell and Zoe Wilcox’s voices. This is one of those tracks where you reach for repeat as it fades away. What is amazing about Bard Edington is the way when you think you have it all figured out, he shows another side. So it is with the stunning ‘Take Three Breaths’, Eric Ortiz’s soaring mariachi trumpet evokes the borderlands as does Freddy Lopez’s harmonica, edge of your hearing like a distant accordian. Bard delivers another fine vocal performance, edgy and knowing as Tom Russell. ‘Espadin’ is an evocative song, a mysterious song whose rich lyrics are packed with imagery, a wonderful close miked guitar and splashes of mandolin and strings. Again simply beautiful. ‘Mississippi Flows’ is a county dance of a song. Packed with pictures Bard draws a vivid view of riverside life with the bubbling fiddle, accordian and mandolin capturing the energy of the water and the weather. ‘Two Ways To Die has Bards electric guitar conjuring the desert blues of both Mali and New Mexico. Again the band crackles with heat and energy, everything from Arne Beys insistant drums to Lopez’s harmonica burns. ‘Painted Pony’ by comparison is perfect restraint, from the limpid piano notes like a music box or distant barrellhouse entertainment to David Mohr Nelson’s accordian behind Bard’s love song. Like ‘Two Ways To Die’ Bard’s electric guitar on ‘Mango Tree’ sears like midday sun. Add the huge drums n bass and the harmonica that manages to out Mussellwhite or Little Walter the moaning harp on Led Zeppelin’s ‘Going to California’ or ‘When The Levee Breaks. Against the slamming expansive drum beaks that last comparison seems particularly apt. ‘Gold And Black’ and ‘Spread My Wings’ feature superb vocals with Bard, knowing and gravelly like that missed California raised but Mojave Desert in spirit musician Robert Fisher. The tracks are musically rich cautionary tales, folk blues shot with mariachi and plaintive harmonica. The fiddle opening on ‘Rendezvous Duel’ has a definite Irish feel and the track builds into a wonderful Bluegrass piece. ‘Southern Belle’ a hallucinogenic swirling Civil War tale. Bard is right on the money with his story telling, Sarah Ferrell’s vocal conjours the Belle and the song snaps and pops with dreamy accordian and hand clap percussion.

Sometimes you hear an over indulgent double album, stretched out with filler, when what it needed to be was a leaner peppy single album. ESPADÍN is a rare thing, the exact opposite of that, a single album so packed with interest, ingredients and ideas, that you can’t help but wonder if it could have been a glorious technicolour double album, as expansive as the American continental landscape. This is one you will play again and again, a contender for album of the year. Check out too Edrington’s two fine bands, The Hoth Brothers and The Palm In The Cypress for three more class albums.