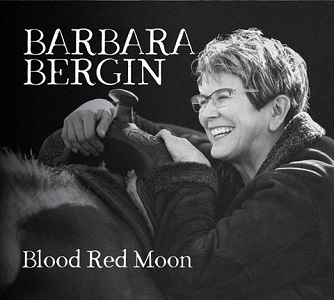 
Well, here's an interesting backstory. Born in the Bronx and now living in Austin, Texas, a still active cowgirl with six champion belt buckles to her name, Bergin is an orthopaedic surgeon and co-founder of Texas Orthopedics, Sports & Rehabilitation Associates. She's published one novel, Endings, and has the non-fiction Sit Like A Man in the works, and is a public speaker for female empowerment. She also writes songs and now, in her mid-60s and after 34 years in medical practice, she's releasing her debut album. And rather good it is too.

Firmly rooted in the same sort of Americana territory as Gillian Welch with a slight rasp to the voice and a storyteller's sensibility, producer Jane Gillman on mournful harmonica, she sets out her stall with the regret-tinged title track ("News says someone's dead and something's burning/He played me a song I wished I learned"), following on in uptempo slap bass style on 'My Life's Good (Cuz I Don't Love In The City)', the first song she wrote, with the air of a bluegrassy Joni Mitchell.

The Confederate General Robert E, Lee figures in two of the songs, first up being the slow sway traditional folk styled 'She Danced With The Young Prince of Wales' on which, Beth Chrisman on fiddle, she recounts the story of a young Confederate soldier remembering the girl he met who recounted her terpsichorean tryst (Edward Albert did actually tour America in 1860), the other being 'Captain of the Robert E.Lee', though, to be strictly accurate, this one's about the narrator recalling how their daddy worked on the titular paddle steamer that ran the Mississipi and how she was sent to live with sharecroppers who "put me to toil in the fields".

As you might surmise from the title, featuring Cathy Fink on banjo, 'Possum's In The Corn' is a bluegrass dance tune family history number and quite possibly the only song to namecheck Gobblers Knob which, as you will doubtless know, is the Pennyslvania park that annually plays host to Punxsutawney Phil as featured in Groundhog Day. Similar bluegrass fare is to be found in 'Like Father Like Son', a familiar tale of philandering men that, incorporating 'Cluck Ol' Hen', calls to mind the sort of old time country stomps popularised by Roger Miller and Billie Jo Spears. By contrast, spotlighting mandolin and concertina, the wedding ditty 'Three Eggs In My Apron' leans more towards a Celtic flavoured do-si-do square dance.

Elsewhere, 'Warm Place' is a piano-accompanied, strummed guitar moody and slightly swampy reflection on life choices made, while (loosely based on the diary of the father of one of her employees) 'Whistlin' Train' is a Depression era Southern country blues murder ballad sung by a man on the run after killing his cheating love and his rival, 'Low Water Bridge' a fingerpicked memory of first love with a chorus that plays a little like a playground song and 'Let's Get On Up' a rousing backwoods spiritual in the manner of the Louvins complete with mention of that good old golden mansion.

The best, however, is arguably, the old time, back porch flavours of the simple circling guitar patterned 'Daughter's Lament', another tale of a woman finding her man's promises mean nothing when there's some fancier skirt around. A late new career entry perhaps, but, relaxed and confident, hopefully just the start of a long one.