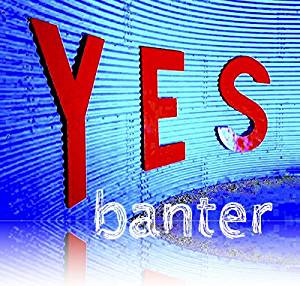 
I was very pleased to be able to catch part of Banter's ceilidh at Shrewsbury Folk Festival this year. I knew that any band with Simon Care as a member would be well worth seeing and hearing and I was not mistaken. First impression, as I reached the distant dance tent whilst the moves were being walked through, was one of surprise - there were only three of them! As a lover of the big sounds of bands such as Blowzabella, Glorystrokes and Simon's other partners in folk grime, Tickled Pink I was expecting to be disappointed. My fears were entirely unfounded on hearing them play - what they lacked in numbers they made up for in superb arrangements. This quality - along with the superb musicianship of all three instrumentalists - is amply demonstrated on their debut release.

Before reviewing the CD I should perhaps acquaint readers with the members of the band. Simon (melodeon / concertina)) will be well known to most folk enthusiasts I am sure from his long involvement with the Albion Band, Tickled Pink and E2. I have to admit to being unfamiliar with the other two musicians: Nina Zella (keyboards / vocals) and Tim Walker (brass / percussion). My researches revealed that Nina has attended Folk Camps and Whitby Folk Festivals from an early age - and has combined her knowledge of folk music with her jazz influenced playing style. Along with Tim (who as well as being a multi instrumentalist is an expert in medieval dance), she was a member of the Liam Robinson Dance band.

The opening notes of the CD sound more like the introduction to a romantic piano concerto but are in fact a clever preamble to a stunning version of the familiar John Kirkpatrick ceilidh mainstay 'Jump at The Sun'. The searing brass and clever interplay between melodeon and piano set the scene for marginally short of an hour of thrillingly funky dance tunes interspersed with three Zella composed songs of which the second, 'Matthew Loves Mark', is the most successful with a beautiful piano introduction leading to a plea for tolerance and consideration. There is not a tune or set I do not admire on the whole CD (even after extended back to back listening for the purposes of this review) but, alongside the first track, favourites include: 'Jake's Jig' (where a drop is followed by a truly exhilarating build centred round a haunting, sustained and wordless vocal cry - this must be incredible to dance to!); the increasingly jazzy Rochdale Coconut Dance / Tip Top Polka set and the traditional Plane Tree with it's central jazz break down.

In my lengthy experience of listening to ceilidh bands' CDs I have often found that they fail to deliver on the excitement of the live experience and are little played after the first couple of listens. This is emphatically not the case here - the imaginative combination of musical styles and the inventive playing of all three musicians means that this stands out well above the crowd. I think I may just have to play it again!!

Jump At The Sun