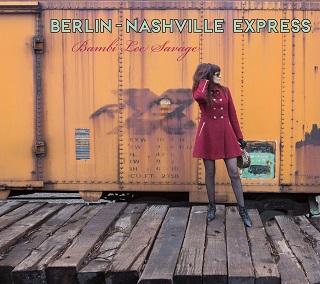 
Not, as you might suspect, the name on her birth certificate, that being Shannon Strong, Florida-born Savage first made her mark as a studio engineer in Berlin, most notably working on Nick Cave's The Good Son and U2's Achtung Baby. Turning to singer-songwriting in 1992, she recorded a four-song demo from which one, 'Darlin'', produced by Daniel Lanois, ended up on the soundtrack to Billy Bob Thornton's Slingblade. Since then she's released three albums, this being her fourth, a continuing collaboration with Mick Harvey from the Bad Seeds who plays on the album.

Written from the position of a post-punk feminist, the songwriting process led her to rediscover her country roots, resulting in an Americana flavoured album influenced by the likes of Loretta Lynn and Hank Williams. Kicking off in twangy form with the loose-limbed upbeat 'Honey' featuring guitar solo from Jim Wilson, it quickly hits the heartbreak trail with the loping autobiographical 'This Blue Heart', the tambourine shimmering 'I'll Have To Leave Town (to Get Over You)', a barrelhouse rock n rolling 'Baby Come Back' featuring a blistering Harvey solo, and the bluesy swing o'I Can't Count On My Man' which, along with the saloon piano backed 'Demon Alcohol', Will Kimbrough on guitar, formerly featured on the 1995 documentary Lost In Music:Out of Country.

There's more booze to be poured on the gospel flavoured rockabilly-rhythm based 'Drinker of Gin', but it's not all heartache and hangovers, the honky tonky 'Get Out My Pillow (I'm Comin' Home)', with Harvey on slide and Glen Taylor on pedal steel has a decidedly positive slant while, written in response to the climate of hate fostered by Trump, 'Walk In Love' preaches the gospel (she's a Born Again Christian) to a walking rhythm and Kimbrough's guitar riffs.

It closes with a waltztime remix of 'Darlin'', its first non-demo studio production, featuring Kristina Train on violin and Harvey on 'slide guitar shimmer', a fine ending to an album that should leave you looking to buy a ticket and ride those rails.