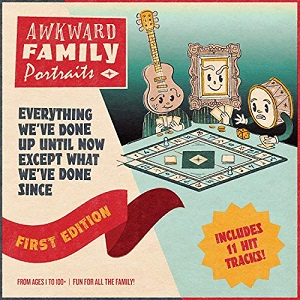 
The scandalously young looking 'Awkward Family Portraits' are a five piece band hailing from Glasgow that have been playing their infectious hybrid of rockabilly 'n' roots infused western swing, country, gypsy jazz, jump jive and pretty much any other genre you might like to throw in, since 2016. Selected as Tenement TV's 'Ones To Watch For 2018' the band have put out two singles before crowd funding this, their album debut, 'Everything We've Done Up Until Now Except What We've Done Since'. Along the way they have developed an enviable reputation as a live act and as well as appearing at big Scottish festivals like HebCelt and Belladrum, they have continued to tour extensively across the UK, the Netherlands and Spain.

Opening track 'AFP Theme' is definitely that, a breathless, whistle stop tour through the bands sound and chops by way of a musical introduction, 'Keep On Keepin' On' is a really infectious, rhythm led spot of timeless jazz and jitterbug before the witty 'Chapati 3' slows things down a little.

This is a brief respite though as 'Can't Control Cupid' and 'Do Yourself A Favour' rattle through in rockabilly style, full of sharp playing and lovely little guitar fills and then, out of the blue, 'Way The Wind Blows' saunters in with trading vocals and a pacing that makes the song sound like it was lifted from the soundtrack of some early 'Elvis' movie.

'Kick The Bucket ft. Memphis Gerald' is pithy social comment hidden in a sumptuous swing suit, 'Day In The Life Of A Lying Man' is slick and sassy, 'Don't Drink The Whisky It's Risky' is as gloriously bonkers as the title suggests, 'Ring, Ring, Angus!' is my second favourite track here, bumping bass lines, reverbed guitar, clattering drums and top vocal (great video on YouTube for this as well), and then it's on to album closer 'Come On Down' which is my personal highlight. Stylistically it's the most neutral track here with its Bob Dylan mode phrasing, sensitive acoustic guitar line, harmonica and glorious ensemble harmonies.

Mixed feelings about this album. There is much to praise here and I can appreciate the undoubtedly great playing, energy and clever songwriting on show and it's easy to see why 'Awkward Family Portraits' are so in demand as a live band. However, on record, it feels a little too derivative and forced, right down to the faux American accents and at times it's easier to admire and respect as a piece of work, rather than actually engage with. For me, the stand out song and performance by a mile is 'Come On Down' which is just heartfelt, authentic brilliance and I would love to hear more of that.

All in all though, 'Everything We've Done Up Until Now Except What We've Done Since' has a lot of appeal, succinctly represents where the band are now and will serve as a great introduction for new listeners. In turn, I imagine a listen to the album will prompt the wish to catch the band live and that's where these songs will really shine.