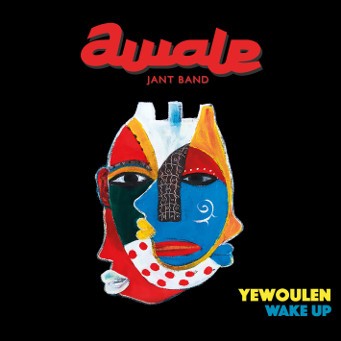 
The name Awale Jant Band, comes from the fact that this eight piece is a combination of vocalist Biram Seck's Jant Band and guitarist Thibault Remy's London band Awale. Collectively these African, French, British and Senegalese music is, performing together now in London for ten years, make an incredibly rich and rewarding sound. Yewoulen (wake up in Wolof) , follows on from Awale Jant Band's debut album JUST HAVE TO GROW and with international release from ARC it will be interesting to see if the world gets that call.

Right from the get go YEWOULEN pulls in a myriad of sounds and music, brass harmonies between John Martin's Saxophone and Laurence Wilkins' trumpet that are straight out of a 60s Blue Note Soul Jazz session, that skittering rhythm from Ben Brown's drums, Thibault Remy's almost ska guitar chopping out jazz chords and Biram Seck's voice by turns crooning and then exulting. "Sope" and "Domi Adama" flash by. Seck is a soulful singer and the band cooks up a infectious layered rhythm behind him. Saxophone and Trumpet provide soulful fills and solo with energy recalling the best of 60s African jazz, but it is all about the pulse and rhythm is always king. Longer tracks like "Cubalkafro" and "Yewoulen" allow the band to lay back a little, the three percussionists, Kaw Seckou and Medoune Ndiaye playing sabra, traditional Senegalese drums and Ben on a more rock kit build a finessed textured rythmn and the band flies over the top. Jazz improvisation meets West African percussion. Laurence offers some trumpet that is tempered electric Miles Davis and John Martin's saxophone just roars. On the longer pieces especially there is a kind of more organic BITCHES BREW feel. There is so much going on and so many things going on as cultural dots are joined that you can listen to this as Jazz, Soul or Afrobeat, or just smile and listen to it as layered music from everywhere. "Jules" after the frenetic music before is a swaying delight, Thibaut's guitar is electric Folk jazz, resolving into a mbira like motif to start with. Biram croons through the first half of the storm to rise with the band as they build like a storm, to fall away again. The light and shade within one song suggests a kind of Prog sensibility, only no capes, dragons or mentions of Tolkien. "Just Be Free" a song of peace and unity, has the energy and pogoing bounce of Bad Manners, only with a mixture of Wolof and English lyrics and some raw guitar from Thibault. Elsewhere on "Amandine" we have some fluttering Cuban jazz moments and an smattering of crackling fun at the start of "Kassak". So many musical moments delivered by a taut lithe band of master musicians and a powerful vocalist that demand to be listened to.