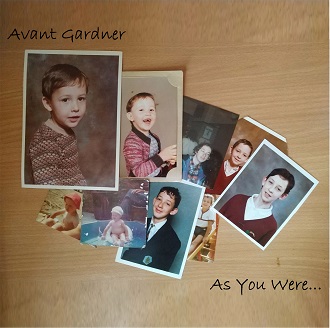 AvantGardner
Album: As You Were
Label: It's Black!! Music
Tracks: 13
Website: http://www.avantgardner.co.uk


Avant Gardner is one of those typically British cult artists that create an impressive volume of work over a long period, seemingly indifferent to fashion, sales or genre, appreciated by a hidden coterie of diehard fans, and periodically presenting a stone cold gem, to be discovered by the rest of us.

Originally from Liverpool, active for the better part of thirty years, this virtuoso multi-instrumentalist went solo in 2000, and, following in the footsteps of such as Todd Rundgren and Stevie Winwood, writes, performs and produces work of considerable complexity and grace entirely by himself.

This may explain the almost preternatural cohesion of the rhythm section on the complex instrumental, Subhuman Rights, which opens the album. Guitar led, it announces itself with a jagged series of building choruses and symphonic sweeps, like Midlake channeling Chick Corea, but, still, greater than the sum of its parts; Gardner weaves his overture with an elegant, if tacit narrative, eloquent even in the absence of a lyric.

The sinuous and snaky bar room blues Till the Roof Kicks In introduces Gardner's idiosyncratic vocals, a distinctive tenor, with a touch of understated vibrato, echoes of Scott Walker and Lou Reed. The reflective Who's Omar In the Phone flows smoothly across rhythm changes and irregular bar lengths.

On this, his eleventh solo release, his writing and storytelling is displayed as shrewdly observational, with irony ranging from gentle to bitter, quoting influences from Syd Barratt to Laura Nyro, Public Enemy to Nirvana, and the album, over two years in the making, is a musicologists delight, paying homage to his musical heroes, but not beholden to them.

There is a gentle humor here too, as on 'The Mistake I Made was in Saying Almost', referencing the stripped-down pop of late period Velvet underground, and the winningly naïve Feeling the Way I Do About Things has a feel of Johnathon Richman.

The album closes with the Smiths influenced Worms under the Asphalt; led by world weary vocals,
'looking for an exit in this maze of lanes we call life'

Gardner, an artist at his peak, is pursuing a lonely vision, creating art for its own sake, oblivious to fashion and trends, but always with passion and taste. Careful to avoid self-congratulation or indulgence, his economy of style and content is tinged with genius, and is, in its own way, quite magnificent.

He is a Marmite artist, and appears indifferent to and unaware of the possibilities mass appeal, forever taking a sharp left off the road most followed, to quote Neil Young, success …
'… put me in the middle of the road. Traveling there soon became a bore, so I headed for the ditch


If you like music that is quirky, intelligent and well crafted, and if you delight in undiscovered gems, then this album is well worth checking out.