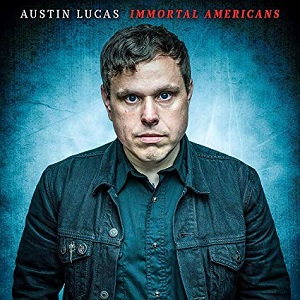 
Recently returned, after twenty years, to his hometown of Bloomington, Indiana where, as he sings in the rhythm chugging, pedal steel streaked 'Killing Time', "I learned to be a man / Watching 80s action movies with my friends", Lucas has been through some dark times since the release of 2016's Between The Moon and The Midwest, hitting rock bottom and heading home to shed weight, quit smoking and get sober while also supporting his partner through her battle with cancer.

Co-produced with Will Johnson, mixed by Steve Albini and recorded live, it all pours into the rugged and rootsy songs of his new album along with reflections on the changes in both himself and his town, emerging with a renewal of the fighting spirit of his Mid-West teenage years embodied in the opening title track with its shah-la-la, ooh-la-la-la chorus, a testament of youth "Born to grow corn and cut stone", their lives forged in music as they "…turned the radio on/Fists hit the air, praising rock 'n roll gods."

Lucas notes how the song is for "the most marginalized and at-risk human beings who live in our country, all the people who live on the outside of mainstream society and have to fight every day for their identities and for their existence."

His songs speak of that disillusion life hands out as it takes away the dreams and exchanges them for realities, encapsulated in the wearied 'Happy' where, "lost among the zeroes and the ones" and looking "to get high 'cause livin' low is all you've known", he asks "Are you happy ewwith your new life?/Are you happy with the new world?/Are you drowning in the dream of shiny new beginnings?" Likewise, on the slightly more uptempo midwestern roots rock 'Monroe County Nights', observing the changes in Bloomington, where the " houses on the hill where I lived seemed so sad…. while salt and pepper hair crowned the heads of unwed mothers" as he muses on how "By-and-by we all are shackled, caged by county lines/Wired, blood-drunk and born into the fight/By- and-by we are no easy prey, but creatures prone to flight/By-and-by on a Monroe County night", like fruit "withered on the vine far before its time."

Opening with spare acoustic notes and faint piano notes 'My Mother and The Devil' is a terrific dark night of the soul, vulnerability like a raw exposed nerve as in cracked tones he declares "I have never been so low", before drums and electric guitar rumble in for the slow march rhythm chorus and the striking balance of damnation and redemption in the line "My father says the devil and my mother/Are the only ones who'll be there/Always and forever, no matter what I do."

His parents don't just get a namecheck. Bob Lucas also plays banjo on several tracks, most notably as, other than a funereal bass drum thump, the main accompaniment on the sombre and skeletal traditional folk-styled 'Eye of an Asp', while, with sister Chloe Manor on backing, the lively, banjo dappled 'Goat and Goose ' relates how his midwestern hippie father courted his New York City mother and made a child who "Might see all there is to see/From sea to shining sea", the story offering up an image of hope in times of darkness.

The same holds true of 'The Shadow And Marie', another, slow-paced, brooding number anchored by glowering electric guitar and spare, heavy drums yet Lucas's voice soaring to falsetto heights on the "new to me" chorus of a number about mortality born directly from his partner's cancer. Lucas discovered a lump on her body during their first evening together and nursed her back to health after a life-altering surgery, the song an anthem to her strength, vitality and beauty and the determination to push towards something better than life hands out."

Another folksy number, the fingerpicked 'Between The Leaves' echoes the idea, moving from the unsettling image of "a dream that springs from the black/On the back of the corpse of a horse" and of being "a gale spit from the mouth of a storm" to the "thought of your beauty on the day that we met/And the feel of your form in the dark/Not everyone is chosen or lucky enough/To be willing and around when a man longs to be loved."

It ends on another note of reflection with 'Shallow Inland Sea', striking a melancholic downbeat sense of both loss and nostalgic fondness as it looks back on the romantic notions of youth that are dissipated with the passing of the years, as he sings "Oh what a dream I had when I was young/What a dream it was: To proudly die for love/Where do they go, the dreams of the young?"

In Lucas' case they go to form songs like these, not always happy, but limned with hope, reminders that "you have to keep fighting, because that's what makes life worth living."