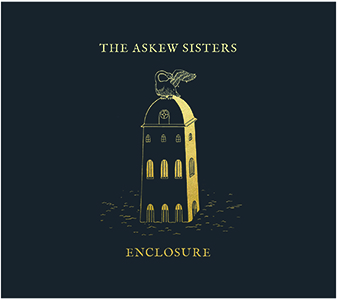 
Every performance and arrangement on this album suggests care and sensitivity from the outset. Each layer gives the impression that is has been carefully selected to serve it’s chosen purpose. From this restrained palette the Askew Sisters have created a diverse collection of traditional arrangements, from lilting tune sets to driving explorations of traditional ballads.

The pizzicato strings are an integral part of the fingerprint of this project. At times the plucked cello is a subtle grounding presence, such as in the opening track ‘I Wandered by the Brookside’ where it offsets the reedy chords, or ‘My Father Built me a Pretty Tower’ where the cello pizzicato picks up the rhythm with fingerboard percussion. It is, however, often the finger-picked fiddle that comes to the fore, as in ‘Georgie’ where the plucked violin ostinato carries the tune forward.

The bowed cello and fiddle both take the opportunity to play with a range of textures throughout the recording. The cello takes centre stage in the arrangement of ‘Goose and Common’ with long grounding chords offset by moments of restless urgency as the lyrics paint the bleak picture of the fallout of the Enclosures Act. Later, in ‘Moorfields’, the cello sings a restrained low lament. Further on, the fiddle has its chance to share a sorrowful offering in ‘The Wounded Hussar’, a contrast to the playful solo that opens ‘The Firr Tree’. Just as the cello drives arrangements like ‘My Father Built me a Pretty Tower’, the violin takes over in ‘Castle by the Sea’ with a skipping rhythm of double-stopped chords under the vocals.

In every instance the instrumental writing supports the vocals that sit at the front of each arrangement. As the album includes so many rich narratives, the presence of the vocal is key to following the story, and their clarity and immediacy ensures that not a single word is lost. At times, Hazel’s voices soars over the texture as in the crescendo of ‘I Wandered by the Brookside’. At other times she draws out a different quality such as the opening of ‘The Wounded Hassar’ where her voice becomes the solo instrument in a beautifully executed example of mouth music. This contrasts again with the plaintive sighing glissandos of ‘Georgie’.

The whole project is finely crafted and every nuance feels deliberate and necessary. The sisters’ experience of traditional material is evident in the precision, sensitivity and skill with which it has been handled. Whilst respectful, it also demonstrates a confidently contemporary approach and the album is undeniably fresh and remarkably relevant.