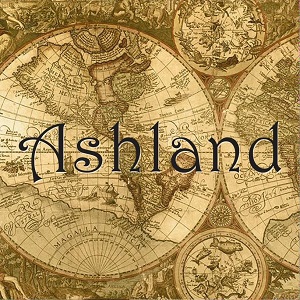 
I first came across Ashland via their application to play Busk Love Folk as part of the season opening Love Folk Festival at the Atkinson in Southport, back in February. At the time, they didn't have a release available, but a viewing of a video link they had sent immediately told me that this was a duo that I wanted to appear.

As it happened, their appearance at Busk Love Folk sort of turned out to be a bit of a soft launch for their debut EP, "Funny Old World", that had quite literally arrived back from the pressing plant the night before. Both live performance and EP convinced me that I also needed to offer Ashland a slot on the Fatea Showcase Sessions. (Keep an eye on our news section).

The great news is that "Funny Old World" is now much more available and well worth getting hold off. Consisting of vocalist Kathryn Marsh and guitarist David Sutherland, Midland's based duo have a sound that sits in the area where folk hits the more sophisticated side of acoustic pop and you don't have to listen too hard to pick up the occasional jazz inflection to add to the depth of the songs.

The songs are deceptively simple, Marsh's voice has a relaxed, almost easy going timbre to it, but like a summer breeze, it gently caresses its way into your consciousness to ensure that it delivers the essence of the song.

That is easily aided and abetted by Sutherland's cleverly understated guitar, and occasional backing vocal, that provide counterpoint and harmony respectively, to ensure that each song has a depth that can be explored.

"Funny Old World" is a great introduction to a new duo, one that is able to deliver in both the live and recorded space and hopefully one we'll be hearing a lot more of.