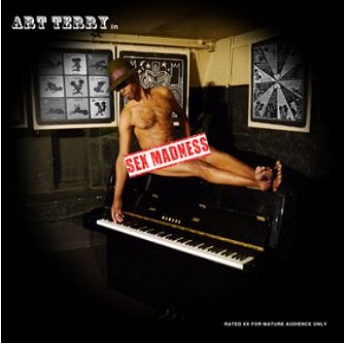 
Are there no bounds to the FATEA manifesto? With Art Terry we steer very close to the boundaries of taste, possibly with tongue firmly in cheek (or maybe not) as we encounter a thankfully censored introduction with a couple of cover shots that recalls Terry Jones' naked organist on Monty Python. As you glance down the song title list; 'Pimp', 'Casual Sex' and 'Can't Get No Pussy', all played out by the Sex Madness Orchestra (who else?) there may be a few "well, really!!!" moments, and that's just for the double negative.

However, peel away the coating and you'll find songs that reflect Art's upbringing that spanned the black American gospel/folk traditions and the LA rock'n'roll culture. So yes, while there's an unavoidable sexual element it's one that crosses paths with politics and religion and accompanied by a psychedelic and funky soul soundtrack. Terry himself and Raphael Mann lead a hefty band who show their prowess straight away with the instrumental 'Theme From Sex Madness', an overture whose lush tones and production provide a seductive opening. Sans the key phrase, 'Can't Get No Pussy', inspired by some rather strange laws in certain US states, rides a cool groove in way that his holy purpleness, Prince would enjoy setting up. It sets the tone for the recurring vibe in 'Ask Her' where the genderification of God is the theme; a preacher declaring his worship of female genetalia as the origin of mankind.

Challenging and contentious issues, granted, but we collide with the film world of Spike Lee with 'Casual Sex', a song written about Art and brother Stew's European experiences as young men - Stew's musical, Passing Strange, was filmed by Lee. The song certainly has an easy and carefree Euro vibe, yet in contrast, old school funk and soul blends with rocking gospel frolics on 'Pimp'.

The 'Sex Magic'/'Sex Madness' closing pair combine Sgt Pepper fairground to-ing and fro-ing in the former that seems at odds with the sex obsession and unexpected and bizarre electronics in the latter that quickly gets passed. It may have you hankering back for a bit of soul and appreciating that 'Sex Madness' is all about the groove.