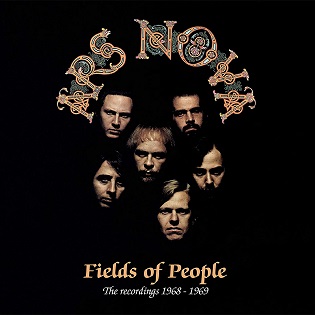 
Ars Nova was an American band active at the tail-end of the 1960s, peddling a brand of psych-progressive rock that was considered groundbreaking in its unashamed fusion of rock with jazz, soul and classical influences. Perhaps the biggest clue lies in the "arty" band name, after all, and they would initially find a natural place on the eclectic roster of Elektra label boss Jac Holzman, for whom they recorded their eponymous debut LP which was released in 1968.

The band was formed in 1967 by former musical conservatory students Wyatt Day and Jon Pierson with Maury Baker, then subsequently further augmented by Giovanni Papalia, Bill Folwell and Jonathan Raskin (the latter departing after one album to join another Elektra act, Rhinoceros). From the start the musical complement was unconventional (even for its time), consisting of guitars, keyboards, trombone, trumpet, bass and drums, and at times the arrangements verged on orchestrated chanson as much as rock gestures and structures. I hear echoes of the lightly augmented passages of Love's Forever Changes, particularly in the brass work, but another possible comparison in terms of sound and arrangement might be Blood Sweat & Tears, or Chicago, but without the harder R&B overtones of these acts. Either way, any comparison rather undersells the serious originality of Ars Nova.

There are distinct and overt classical influences on the band's debut - Pavan For My Lady contains some suitably intricate lute-like traceries, and some of the tracks are punctuated by brief instrumental Entr'actes with brass chorale or a churchy organ. The "rocked-up classic" trope is given a new twist on Zarathustra, a surprisingly funky take on the iconic opening sequence of Richard Strauss's tone poem. On the other hand, the expansive and majestic rock guitar solo is not forgotten either (And How Am I To Know), and slightly wacky psychedelia is introduced on Album In Your Mind and Fields Of People (the latter was even credibly covered by The Move on their 1970 Shazam! LP). The band's debut album made a lot of sense, and even today most of it bears repeated listening that transcends any dated touches like the uneasy marriage of frippery and crooning on Automatic Love and its ensuing entr'acte.

Promotion of the band's debut LP was scuppered somewhat, both by the impracticalities and complexities of the instrumental complement and rifts in the lineup; even a reconstituted lineup (with only Day and Pierson remaining) defied logistics for touring, and so a second album, Sunshine And Shadows, was recorded for Atlantic. Inevitably, its release was delayed (by management problems), and it proved impossible to capitalise on its positive qualities, resulting in the band disbanding altogether in the fall of 1969. This second album was harder-edged than its predecessor, with more of a driving rock character, and generally (to me) less melodically interesting as well as less classically-inclined. Temporary Serenade was a gentler excursion into rock-baroque that recalled first-album track Pavan, Rubbish contained some tasty swinging jazzy hot-club frippery, and Please Don't Go Now veered towards Americana, but elsewhere, vocals aside, there was less of the sense of identity that had defined that debut LP. Even so, it wasn't by any means a bad album.

This double-disc set presents well-remastered versions of both albums but, sadly, no bonus material (meaning that both albums could've easily fitted onto one disc) - but the freshness of conception and execution certainly comes across anew here. For the music the band made for just that brief creative timespan can (and not just in retrospect) be viewed as original and innovative, albeit something of an acquired taste - one which (at the time) fellow-musicians and the critics tended to dig more than the record-buying public; even those more discerning listeners receptive to the new "progressive" movement didn't quite know what to make of their musical adventures.