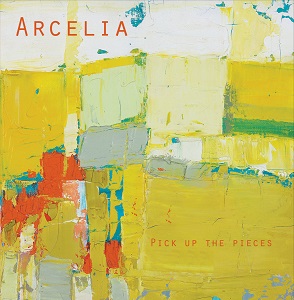 It opens with one of three Alexander songs, taking lead on the steel-keening, fingerpicked lyrically sardonic ("I've been dealt a lucky hand/How can we mess it up/With such a full cup") number 'Lucky Man' (taking a bluesy break midway), the other two closing proceedings, first with the jazzy guitar stylings of 'People Like Me', a song about the exploitation of the weak by the strong ("People like me deal in sorrow/People like you bear the scars") with the deeper, bluesier voiced Foster upfront and suggesting some John Martyn influences in there, followed by the simple Alexander solo acoustic picking of the loss-themed ("Pick up the pieces now you're laid to rest/Brush your photo as I walk on by") title track

Of the two remaining numbers, the dreamily reflective ("I take myself back to a place where I had so much to give/But it wasn't enough"), piano and steel-coloured 'Wasn't Enough', sung by Gallagher, is a co-write with regular Alexander collaborator Cat Bloomfield, the other being the sole cover, birdsong augmenting a terrific unaccompanied three-part harmony, blues and gospel flavoured arrangement of McCartney's 'Blackbird' that underscores why regular references include CS&N. They've been championed by Chris Difford, you should squeeze them into your life too.