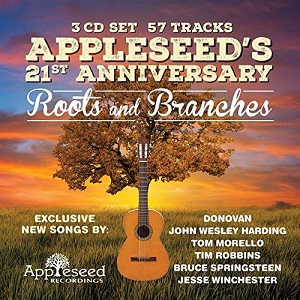 
Appleseed Recordings is the quintessential independent idealistic record label. Founded in 1995 by passionate music enthusiast and self-confessed vinyl junkie Jim Musselman following a Damascene conversion to what can loosely be termed folk/roots music – a conversion that started with hearing Dylan on the radio, which led on thru Seeger to Baez and Ochs and finally to Guthrie, whose axiom “it’s a folk singer’s job to comfort disturbed people and to disturb comfortable people” is (entirely rightly) prominently emblazoned on the inner face of the lavish eight-panel digipack housing the three-disc collection which forms the label’s latest – and very special – release celebrating its 21st anniversary. I guess we can all identify with Jim’s reaction: “the power of words to express emotion and convey an idea touched my heart and my soul”, and Guthrie’s philosophy, as expressed in his book Bound For Glory, has informed Jim’s own career path (for, in effect, music is what rearranged his life) – to be “creACTive” in starting a record label with a mission and a vision. And throughout the past two decades, Jim’s been fortunate in securing the talents of some of the finest folk musicians of our age, many of whom have recorded tracks specifically for the label. Thus, in true Appleseed tradition, nine of this anniversary collection’s tracks are exclusive new recordings, tracks which are available nowhere else, by artists including Bruce Springsteen, Tom Russell, Anne Hills, Jesse Winchester and Donovan.

Each disc of the set is devoted to a separate aspect of the label’s focus, and while they prove a highly complementary combination the effective programming of each of the three individual discs also points to fortuitous coincidences and connections. Disc 1 is subtitled “Let The Truth Be Told”, and contains the politically-oriented material – songs addressing contemporary issues such as racism, gun violence. Immigration, homelessness, war, poverty, corporate greed and political corruption. Pete Seeger figures prominently of course, as do Billy Bragg, Sweet Honey In The Rock, Joan Baez and Johnny Clegg, with two contributions from Bruce Springsteen including an unreleased If I Had A Hammer. Another standout on this disc is Anne Hills’ new recording of Bert Jansch’s Needle Of Death.

Disc 2 concentrates on “The Wisdom Keepers”, in other words celebrating the universal artistry of modern-day singer-songwriters whose songs are built on personal experiences and observations. Exquisite new recordings by John Stewart and Jesse Winchester provide excellent companions for appropriate tracks by Angel Band, Tom Rush, Lizzie West and Tom Paxton, while Dick Gaughan contributes one track apiece from two of his albums that appeared on Appleseed (Sail On and Outlaws & Dreamers), including a trademark cover of Phil Ochs’ When I’m Gone.

Disc 3, subtitled Keeping The Songs Alive, explores the roots and branches of traditional song as recorded by artists on the illustrious Appleseed roster. Heading out with John Gorka’s peerless take on The Water Is Wide is a masterstroke, as is the inclusion of tracks by Jody Stecher & Kate Brislin (a choice cut from their album of Carter Family covers), Roger McGuinn (an exemplary duet with Judy Collins on John Riley), John Wesley Harding (a Dylanesque Canadee-I-O from their Nic Jones tribute disc) and Tim Eriksen. Donovan turns in a gently treasurable, simple account of Wild Mountain Thyme, and a rousing congregational arrangement of Oh Mary, Don’t You Weep by Bernice Johnson Reagon with Kim & Reggie Harris is another standout selection. Sadly, there was room for just one brief Frank Profitt recording from Appleseed’s wonderful two-volume compendium of Jeff-Warner-curated archive field recordings; and my other regret is the omission of a sample track from Jody Stecher’s landmark solo CD of ballads Oh The Wind And Rain…. But this third disc in particular brings us reminders of some of the neglected gems of traditional music interpretation that nestle within the Appleseed catalogue, acting as spurs for further exploration without doubt.

This is an exceptional anthology, an entirely fitting celebration of Appleseed, handsomely packaged in the very finest traditions of the house and the absolute embodiment of the integrity and vision of its founder and its artists.

Are You Sleeping Maggie