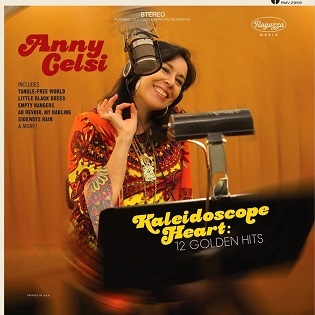 
If you've not come across her before, Celsi (pronounced Chelsea) is an LA-based singer-songwriter and radio producer who, evoking comparisons to the likes of Chrissie Hynde and Sheryl Crow, specialises in catchy, melodic, 60s-inspired country-inflected pop. To date, she's released three studio albums, Little Black Dress & Other Stories, Tangle-Free World and, the most recent, 2013's January, from which this collection gathers together a dozen of the best in remixed and remastered versions along with a brand new recording.

The first of four from the album, she kicks off with the boy meets girl and everything gets messed up 'Tangle-Free World', instantly prompting thoughts of The Monkees' 'Pleasant Valley Sunday'. The three others, spaced across the track listing, line up with the shuffling The Night She Learned To Drive which draws on memories of a road trip she took with her then young son Ivan (who sings back up and plays trumpet on the title track) and turns them into a bittersweet story of a mother taking her young child and fleeing an abusive relationship. Then, back to back in the final stretch, comes the swaying, organ-backed, horns packed 'Now You Can Hurt Me', which brings together her love of soul, Dusty Springfield and Brill Building 60s girl groups, and the dreamy, piano-led, trumpet and strings accompanied pop of 'Own Sweet Time' which drips with pure Bacharach.

'Empty Hangers' is the first from her 2003 debut, an introductory Dylanesque harmonica giving way to the opening line "every girl deserves a nervous breakdown", the number shifting between a poppily driving pace and slower passages, such as where she describes the woman in the song feeling like a closet full of empty hangers.

By contrast, the jaunty walking rhythm 'Summer Fling' comes with a sunny chorus bounce that conjures 60s memories of the Cowsills while the title cut, featuring plangent guitar from former Lone Justice member Marvin Etzioni, is all backbeat 60s pop. The last track, inspired by Theodore Dreiser's Sister Carrie novel (the last pages especially), is the mid-tempo ''Twas Her Hunger Brought Her Down' which, with Randy Weeks on banjo, also spotlights her pulp noir narrative skills.

Her most recent album again offers three tracks, first up being the slow, soulful 'Oh Baby, Is The Circus Back In Town?' a Celtic tinged ballad about chasing dreams followed directly by 'Kaleidesope Heart', a ringing guitar, autoharp shaded waltzer about love described as glass shards, beautiful but sharp. The third takes the pace up for "leaving in the morning" themed 'Au Revoir, My Darling' a bouncy Motown beat, liberally splashed with horns and handclaps. Which leaves the all new, jangly 12 string Rickenbacker pop 'Sideways Rain' which, recorded specifically for the album, takes its inspiration from the bridges across the Williamette River in Portland, five of which open in various manner to let ships pass through, leaving motorists stuck until they close again, having street parties and kids playing, used here as a metaphor for a carefree, unhurried way of life.

For the uninitiated, this is a great introduction to Celsi's work, for long serving fans the tantalising prospect that there might finally be a whole new album on the horizon.