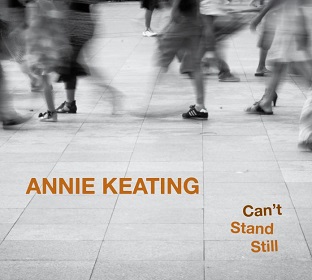 
Having lulled audiences into a false sense of security with last year's Ghost of the Untraveled Road EP, the Brooklyn-based songstress goes for the solar plexus with this mini-album that cranks things up to rowdy, rock levels with thumping drums and disreputable guitars. It punches its way through the starting gate with the piledriving propulsive rhythm and bluesy riffs 'Beholden' as she gives the finger to those who'd presume to tell her what to do and keeps it rolling with the Stonesy swagger of '$20' about finding yourself getting old. The politically slanted 'Mother of Exile' reins it back in for a slinky swampy prowl and slows down even more for the soulful 'Sun and Moon' from whence comes the album's title as she sings "I like walking cos I can't stand still."

The it's back into the ring with the gloves off for the driving Southern boogie rhythm of 'Boxes' with its handclap stomp chorus before closing up the shutters with a slow blues piano accompanied take on Cat Stevens' 'Trouble' that makes it sound like it might have come from 'The Big Pink' or 'Exile on Main Street' rather than 'Mona Bone Jakon'. It's a solid addition to her catalogue, but given it's three years since Trick Star perhaps 2020 will finally deliver that full-length seventh album.