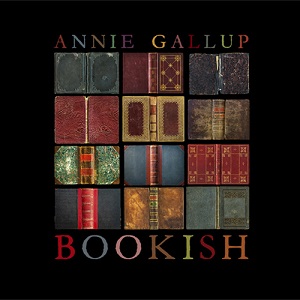 
Written and recorded totally solo and absolutely live in the studio during her first winter living in Maine, the title is singularly appropriate given Gallup's literate, storytelling style.

Backdropped to Caribou, the state's second largest city, and a nameless war, but, given the era allusion, possibly Korea or Vietnam, the album opener, 'The Roads Were Deserted' has a Janis Ian air about it, the lyric sketching a young woman remembering a road trip, "Thrilled to be far from town and the weight of the war with a man I barely knew traveling unfamiliar roads", the stranger not away fighting on account of a 'deferment', "Which he only hinted at", going off to get petrol when the car breaks down, disappearing around the curve never to return. A capsule mystery, it ends with how, after the war ended, "One day I drove past Caribou searching for clues/But of course it looked different, the road was well travelled", leaving the listener to devise their own conclusions.

The second track, the equally pared back 'Sputnik', has a specific date, 4 October 1957, the day Russia launched the first satellite and a turning point of contemporary history, the start of the space race, "As your god was crowded out of heaven by humankind…the cold war playing out against the cosmic void", recalled in childhood memories "scanning heaven through a child's telescope/That couldn't tell a satellite from a star or an asteroid". It also references 4 October,1927 the day work began on Mount Rushmore as the song unfolds as a meditation on our insigificance in the grand design, as she sings "You feel like a child's sketch of a satellite on a sidewalk in chalk…But you long to be much more/To be chiseled in stone and visible from space for eternity".

Memories continue to unfold with 'Living Legend', the line about "the blues poet laureate" a reference to R&B star Percy Mayfield, although when she sings "I played the opening set, and that's how we met/In fall of '97", given he died in 1984, it's clear he's more a metaphor for how music can be a mirror to your soul and how musicians of such charisma can make you feel that "Everything I knew better than to do I was ready to forget" and how, echoing 'Candle in the Wind', "the story ends. But not the legends".

There's an aching tenderness to 'Misunderstood' which may or may not be about her husband and singing partner, Peter Gallway ("He's too tall for the furniture, too bony for his clothes, he curls like a question mark in the doorway") but beyond any autobiographical interpretation its essentially about connections and compassion ("When he rests his chin on his folded hands you might think he's a man lost in prayer/But I know him too well and I can tell/He's not lost in prayer/Just lost…".

Conjuring thoughts of her previous album, Lucy Remembers Her Father and the title song about the father who left home before the narrator was born but remained in her life, 'My Father Loves Poetry', another reverie, also explores the father-daughter relationship with piercing poignancy as the lines "My father loves poetry/That is something he doesn't yet realize/Because he's yet to read a poem he loves" are, as she recalls scoldings, tempers and of having "given up being good/And settled for invisibility", devastatingly compounded with "Still ever since I was a kid/I had to believe he was capable of loving me/Because he loves poetry".

The whole question of art and autobiography surfaces in the Cohen-echoing 'Pseudonym (the refrain "Everybody knows" no coincidence) as the narrator declares "so not to betray my next of kin afraid what they'd say about what I've exposed/I chose to assume a nom de plume" but that "I wrote what I wrote not to blame or unburden/Or for vindication, but to open the curtain and let the light in". And, in riposte to those who accuse writers of letting the skeletons out of the family closet to make money, she pointedly declares "they're a goldmine and also a landmine, yes, but they're mine".

A similar notion of the blurring between personal fiction and personal fact in the cause of creativity informs 'The Trouble With The Truth', about writing a song about a philandering unfaithful lover that is, in fact, about the hurt and loss betrayal brings whereby she sings "I just want to describe things/Like the color of his shirt left on the back of my chair but how do you describe a shade without comparing it to something/Like the sky, forget me nots" or about creating a drawing with one colour for criminals and one for saints - "that's all I want to say about love".

'Fellow Traveler' returns to childhood memories and a theme of coming of age in an almost fairytale-like story of a young girl learning the wisdom of life and of self-discovery ("He showed me everything I never knew I wanted is true") from the kindness of a traveller on the riverbank ("Later I would say that day was when I learned to talk/Because in my mother's house I was afraid to speak at all") before he moves on, but leaves her knowing "that once I grew I'd leave my mother's house behind/And I knew that once I grew I could leave".

Another echo of Janis Ian, 'East 10th Street' again returns to the past, specifically 1950 New York and the emergence of the avant-garde art movement in reaction to the Eruopeanm Modernists who dominated the museums and the complacent long-established galleries. A vibrant artistic moment centred around the titular Manhattan neighbourhood, it was populated by such names as Angelo Ippolito (who, with Lois Dodds, turned an empty storefront into the artist-run Tanager gallery), Jasper Johns and the abstract expressionists Willem and Elaine de Kooning, and remained the epicentre of thew New York art scene for 50 years.

Given the title of the album it takes its time actually getting round to a song about an author, but the penultimate number is 'Annie Proulx', the American novelist who wrote The Shipping Forcast and Brokeback Mountain, the nervy melody reflecting "all those words words words words words" and how she "knows exactly how to tear you in two", as the song comes round, again, to the point of how great art throws up a mirror to ourselves ("yeah, that was our story all along").

Having started out in Maine, accompanied on electric piano, the album ends in 'California', albeit only to draw a contrast between the calm of Maine where "Back here, it's so quiet, silence is a thing you could break with a hammer or a whimper and the tide goes out until the ocean's a lake" and how "When the tide goes out in California they build houses on the sand/Then when it floods back in, washes them away, next day they build them all again/And call it creating jobs".

It ends with a conundrum as, having talked of how everyone's gone off to the new California gold rush, she asks "if I'm a stranger with a secret/And there's no one to be a stranger to/No one to keep a secret from/What does that make me?"

I'd say an exceptional singer and songwriter.