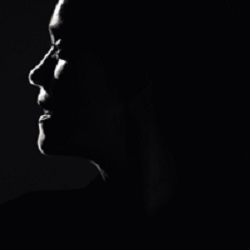 'You Keep Me At Arm's Length' makes for a gently flowing opener, Almedal crooning the wordless refrain between the verses over the march beat drums before the tinkling, glacial felt piano of 'Here Comes the Train' takes things off into a dreamy, whispery sonic world accompanied by spidery drums.

The album's sole cover comes with The Cure's 'Lovesong', transformed into a ghostly, otherworldly ballad with an opening percussive click like a scratch on a vinyl disc, a mood that also haunts the slowly gathering tempo of 'Into The Shadows' while 'Oh Hard Times' is cinematic swirl on a string quartet cloud.

In contrast, 'Sheltering Sky' is positively rock'n' roll with a walking rhythm drum beat and pulsing synths that suggests perhaps Enya fronting the Velvets, slowing back down for more spare contemplative piano and xylophone on 'One Step', her voice at its most upfront and pure here, the bass, synths and drums gradually joining the journey.

Things remain pretty much the same through the three tracks leading to the close, the piano-led 'Travelling' capturing a particular mountain air and streams air before returning to her more hushed intimacy with the resigned end of relationship mood of 'Answer Me Now'. One to slip into the player when you feel the need to chill out.

You Keep Me At Arms Length