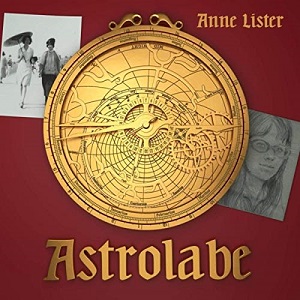 
Anne's one of the singer-songwriters I fondly remember first encountering in the folk-starved decade of the '80s. Her music made an indelible impression on me then, and time has not diminished this. Her immortal creations Icarus, Moth, Stone Circles and How To Stand Still were but four highlights of the wonderful 1986 Fellside LP Burnt Feathers which she recorded with Mary McLaughlin under the duo name Anonyma, (Guest musicians on that album were Laurie Harper and Martin Simpson, and Martin's own subsequent cover of Icarus has formed a compelling introduction to Anne's songwriting for many a listener.)

It's been all of 12 years since Anne's last album, A Twist In The Story: that time has been fruitfully spent, mostly in academic research (thus gaining her PhD), novel-writing and storytelling. But this particular new album's also been a longer time coming because of the sad loss of Anne's good friend Liv Elliott at a point when the recording was almost complete; nevertheless, Liv's status as Anne's collaborator and resident recording genius (ever since the 1980s) ensures that her presence is strongly felt on this album.

The collection of songs that has finally made it onto CD as Astrolabe, Anne's ninth solo record, mixes new songs with older compositions, providing ample evidence of the consistency of Anne's writing over the years. And of course, of her continuing preoccupation with the theme of time and place and its effect on humanity, transcending mere nostalgia (even while recognising this can play a large part). One of Anne's special songwriting gifts is to draw constant parallels between the ages, and between myth, legend or fairytale and contemporary life, much in the manner of the classic storytellers. And another is her natural talent for conjuring gorgeous folk-style melodies in which to clothe her memorable and literate lyrics. While her distinctive, readily appealing singing voice is present again here in all its glory, and she's managed to augment her own simply melodious guitar accompaniment with frequent instrumental contributions from Steafan Hannigan, Mike O'Connor, Barbara Griggs and Matt Crum and lovely vocal harmonies from Mary McLaughlin with further occasional vocals from Helen Vincent-Tibke and Anne's husband Steve Purbrick.

You might not be familiar with the astrolabe itself: it's a time-proven navigational tool, an astronomical device which is used to triangulate, determine local latitude or work out rising and setting times for sun, moon and stars. The contradiction between the astrolabe's operation and purpose and its reputation as "the thief of stars" is examined in the album's opening (title) track. But the astrolabe itself can be seen as an emblem for the album's songs, in the sense that their latitude can be seen to quite literally span time and place, from Roman times (the touching love song Vindolanda) to a bang-up-to-the-minute political scenario (Small Ways To Beat The Devil), by way of Arthurian legend (Camelot Revisited), World War One (Mametz) and a grandmother's memorabilia (Photograph). Elsewhere, Llanwenarth contains folky rural philosophy within its poignant sense of hiraeth, and the Housman-esque The Summerlands tenderly addresses the act of saying goodbye to loved companions.

Wolf Moon plainly but desperately posits that there's really no reason for the world's madness and cruelty, Mametz (named after a 1916 battle during the Somme) voices Anne's deep and powerful reflections on warmongery, and Small Ways To Beat The Devil is a thinly disguised, chirpy and yet perhaps not so tongue-in-cheek recounting of recent happenings. Grandma And The Wolf is a delightfully sideways "twist in the story" fairytale (with something of an air of Rosselson amongst the Lister, methinks!).

The charming The Mountains Of Mars, which closes the album, is described as a song of reconciliation, forgiveness and rejoicing; in this it seems to summarise Anne's philosophy, and culminates in a joyful morris dance played by the entire ensemble. "Come to my wedding and I'll dance at yours, Time's a great healer and truces end wars, When hearts are broken they're mended with gold, There's more than one way for a tale to be told". There is, indeed - and as ever, Anne proves herself the perfect storyteller.

Astrolabe is pure magic: abundantly classy songwriting encased in a beautiful digipack; and it's great to welcome Anne back.