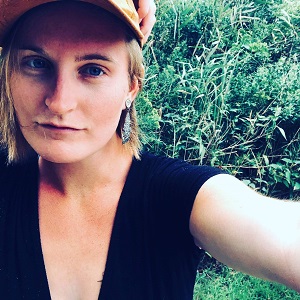 
Anna May is a musician, teacher and resident organist at Grassy Hill congregational Church in Lyme, Connecticut. What jumps straight out at you from the six tracks on FLIMSY DIATRIBE is her smoky beguiling voice. Think Aimee Mann or Kristen Hersch in intimate acoustic mode. On this set of songs, Anna accompanies herself on a minimal strummed guitar, generating the reverent intimacy of Jeff Buckley's Siné Sessions recordings. Her songs are not as the title suggests inconsequential rants, rather they are stream of consciousness poetry where the sound of the voice as much as the words draws you in. Showing as much of a connection to some of the English romantic troubadour poet singer songwriters like Roy Harper or Al Stewart "Poet Masquerade" clocks in at an epic ten and a half minutes. With just guitar and Anna's glorious voice the effect is almost raga like, washing over you, drawing you in.

This is music you have to listen to, it generates an image in my head of musician hunched over guitar playing to an enraptured audience in a Greenwich Village club, wine glasses and candles on the tables., "Chameleons" increases the tension and tempo, but Anna May's voice is close miked and intimate, full of coiled passion and tension like a torch singer breathing their words into the mike. "Acadia" is probably the stand out track for me from a strong set, the guitar is minimal and back in the mix, with that wonderful voice crooning and soaring over the top. "Septembre Encore" and "... If You Don't Want My Compliments" continue that intimate stroked urban Americana Chanteuse sound that is such a satisfying way to spend half an hour listening to and falling back into. If UK 80s label 4AD or Mazzy Star opened a Greenwich Village Cellar open Mike and Folk Bar this is what it would sound like.