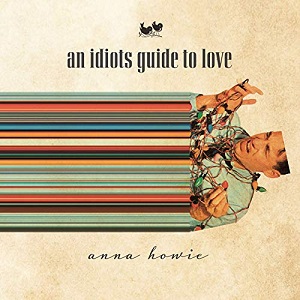 
Anna Howie is an Americana singer-songwriter hailing from London, England. Taking inspiration from the likes of Paul Simon, Joni Mitchell, Bruce Springsteen, Kate Bush and Dolly Parton, Anna weaves upbeat tales around love, loss and friendship and has been working her songs live for some time now, either solo or with her band. Her history tells of time spent as a function, backing and session singer, appearing on many albums in this guise, as well as fronting several bands and gigging all over the UK and Europe. Anna is also a songwriter of note with many collaborations under her belt and also finds time to encourage and nurture local talent with her popular 'Hop Sessions' nights.

To date, Anna has released 2 albums, the well received 'Tales From A Telephone Box' and 'Under The Bed (And Other Hiding Places), both produced by Phil Hudson who has also worked with Carleen Anderson, Bobby Bird and Mica Paris amongst many others.

In a bold artistic move, Anna decided to record ' An Idiots Guide To Love' in Nashville and it is produced by Bob Brit, who numbers the Dixie Chicks and Delbert McClinton in his producers roster, and the EP also boasts contributions from a host of stellar musicians with Bob Britt himself on guitars, Alison Prestwood bass, Lynn Williams drums, Mike Rojas keys and Siobhan Kennedy adding backing vocals across the songs.

Of the five tracks here, three are Anna Howie originals, one is a co-write with Jack Bowden and the final number is a cover of Bruce Springsteen's 'Dancing In The Dark'.

Opener and title track 'An Idiots Guide To Love' seamlessly traverses the waspish and the warm, a paean to the vagaries of a long term relationship built around a lovely acoustic strum and strong melody. Anna's voice is the perfect foil for the lyrics, blending a light sweetness with a bit of gravel when the song starts to push and pull, think somewhere between the darker tones of Roseanne Cash and the airiness of early Joni Mitchell.

'Pull Up A Chair' is deeply personal, written soon after the sudden death of her Father, and focuses on imaginary conversations she still has with him. Again a fine melody carries the song and the lyrics are bitingly direct which serves to accent the heartbreak and avoid any sense of mawkishness that could endanger anything this close to home. What the song also captures vividly and will undoubtedly resonate with most listeners is the ongoing wish for parental approval and affirmation, even if they are no longer with us. "I bet you still think of me, as a girl on a mission who just wouldn't listen, I've changed I swear, I've got so much to share, so pull up a chair". As the lyrics tumble out and the song rolls gently along it's all beautifully decorated with the most subtle musical swells from strings, organ and piano.

'Miracle On The 7:53' rattles through like a revved up 'Folsom Prison Blues' propelled by some smouldering, distorted Seasick Steve style slide, bumping bass, clattering drums and a joyously free vocal from Anna. If you have to catch a train to work, I would definitely suggest getting on this one!

For me, 'In Your Shoes' is the EP's stand out song from both a writing and performance perspective. It's not obvious if this song is from direct experience or Anna's imagination, but either way it's deeply moving. It tells the tale of a bullied girl at school who the narrator longed to help but never really found the courage to, and as an adult she now has to live with the guilt and regret of her inaction. As with 'Pull Up A Chair' any saccharine sentiment that may arise from such subject matter is elegantly sidestepped with the remarkably literal lyrics that simply say 'this is what happened and make of it what you will'. "The boys pushed her around just for fun, in her thin summer dress boots too heavy to run, Maya tripped over the laces undone, undone as she fell, I didn't help her" And then later in the song "One night at her broken gate, I left a pair of old sneakers already replaced, like a thief in the dark I just crept away, no way of knowing she watched me going, Maya found me next day stood with all of my friends, they just turned away, she thought things had changed now she wanted to play, I played with my hair and I left her there". Again the instrumentation is a perfect foil for the song with its lead piano line, bass and understated drums. This is a very good song by anyone's standards.

EP closer is a cover of Springsteen's 'Dancing In The Dark' which manages to breathe new life into this old classic by removing something of the originals bombast and replacing it with chugging, shuffling, backbeat acoustic guitar and whilst remaining upbeat, Anna's vocal brings a more reflective tone to the proceedings.

It's safe to say the result of Anna's Nashville adventure is something of a triumph. The playing throughout is as impressive as is to be expected with musicians of this calibre but it's always in service of the song, never at the expense of it, which is perhaps even more impressive. The production is crystal clear and the mix just right, with Anna's voice sitting neatly on top of things so her lyrics remain front and centre. Lastly, and most importantly, the songs themselves are very strong melodically and Anna is able to tackle weighty topics with her light, lyricists hand in a way that makes them immediately accessible.

I have had the pleasure of catching Anna at one of her shows and even without her Nashville sessions players it will be an undoubted pleasure to hear these songs live.

For anyone wanting an introduction to Anna Howie, start with 'An Idiots Guide To Love'.

Pull Up A Chair