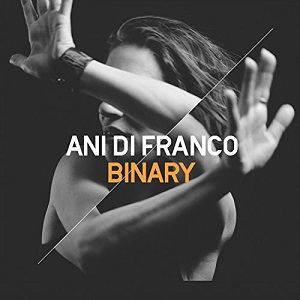 
Looking at Ani DiFranco's back catalogue, and given that Binary is her twentieth studio album that is a lot of back catalogue to look at, you would perhaps be forgiven for expecting something a little more angry and thrashing. As an iconic feminist and social activist, and with the current political situation in the US (and elsewhere) as it is, it would be understandable. Make no mistake, there is a lot of anger in this record, but it is a very mature anger.

It helps that most of the songs were written prior to Trump moving into the White House, though you wouldn't have thought that listening to Pacifist's Lament. It is a wonderfully weary plea to teach non-violence, it being easier to stop trouble before it starts, and comparing our world leaders to children. Play God is a pro-choice anthem, demanding that while the leaders run their world, "in your special way", they should leave this choice to the women who have earned this right.

These tracks have a strong message, but they aren't shouted out and in your face (or ears). They may be political, albeit it closely mixed in with the personal, but there's a mellower, laid back feel to most of the record. Not that she's resigned to the world as it is; she still has a social conscience like a musical Jiminy Cricket, and an impressive rebellious streak.

Not every track is mellow - Spider and Sasquatch provide a driving urgency, the former lifted by pounding drums, while the latter features panting as percussion. Even More is a real highlight, with a great deal of warmth and great use of horns. Zizzing features Justin Vernon from Bon Iver, and is full of atmosphere and a haunting melancholy. Pick of the album though is Deferred Gratification. It's a folky song with a rich vein of both sadness and hope, "I got kids and so do my friends, it'll never be our world again".

Binary is a confident and mature record, which never loses that righteous anger that gives much of DiFranco's music its vibrant edge. Frankly, the world could do more great records like this.