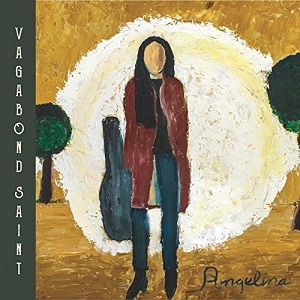 
There's something magical and otherworldly about this record - like a crackly radio broadcast from the 1920s cutting through the binary cleanliness of a thoroughly modern podcast. Angelina comes from the Isle of Wight and learned to sing listening to Bessie Smith, Ma Rainey, Wanda Jackson and, most obviously, Karen Dalton.

The result is an alluring, thoroughly distinctive voice with a big and ballsy fascia that belies the raspy, vulnerable back seat. It's quite something, believe me, as she declaims heartache and pain in I Don't Cry then swaps the tearstains for something more visceral in the hypnotic country crossover swell of Rose Cascade.

Vagabond Saint is an arresting album, but one that's not too keen to reveal all its tricks all at once. Praise be! It's produced with a deft hand by Rupert Brown and populated by a cast of characters that are romantic tropes from the Gothic Mid-West - farm hands, preachers, tearaways, woodsmen and hustlers with unsettling eyes and troubling back stories - lent warmth and humanity by their appearance in songs as uplifting as the opening Dark Heart, a perfectly judged deep soul runaround that echoes but never apes Janis Joplin.

Through the wonky bluegrass tent revival gospel of Prayers and Grace, the title track's Dirty Dozen Brass funk, the suggestive hobo railroad rattle of Smokes Like a Dream and the Greenwich folk styling of Wild Cloud - hell, the vocal melody in January Butterfly even put me in mind of Blue Monday for a moment - Angelina is never short of a sonic move that'll raise an eyebrow.

Bold, brassy and bound for glory.